The following weapons were used in the film Witching and Bitching (Las brujas de Zugarramurdi):

Policeman fires the beretta during the car chase.

Pacheco holds the beretta. Calvo holds SIG at the right.

Policeman at the left draws his USP...

...and fires it. The muzzle flash is most likely GI produced.

Another policeman tries to use his USP.

View of the same scene from another side. 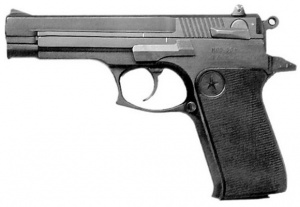 The muzzle flash is seems to be genuine. 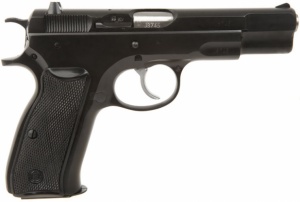 The policeman at the background aims the CZ. This appears to be a flipped shot unless both firearms are left-hand designated.

Policemen Calvo (Pepón Nieto) and Pacheco (Secun de la Rosa) both use SIG-Sauer P226 pistols. In a continuity error, they turn into Beretta 92FSs during a scene in the Witch mansion.

Another view of the Calvo's sidearm.

Calvo and Pacheco with the pistols.

Pacheco with the pistol.

Pacheco holds the beretta. Calvo holds SIG at the right.

A Norinco Type 77 can be seen in the hands of one policeman. 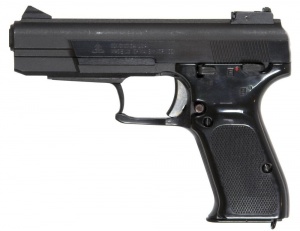 The policeman in the front has the 77B. This appears to be a flipped shot unless both firearms are left-hand designated.

Antonio (Mario Casas) carry M1911A1 when he was masked as living statue. It can be IDed by a standard WW2 US Army M1911A1 holster.

A Glock-style pistol can be briefly seen in holster of one policeman.

Policeman with the holstered handgun arested one of the mobsters.

View of the grip from another angle.

Various policemen uses an unknown pistols at the film beggining. 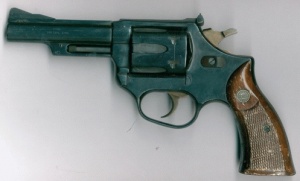 Bill collector with the holstered revolver.

Good view of the muzzles.

Policeman with the holstered revolver strugkles with the mobster.

Good view of the revolvers.

José aims his revolver at Graciana.

...and as a result he misfires.

Remington 1858 New Army can be seen on the book.

Hand with Remoington is seen.

Single Action Army can be seen on the book. 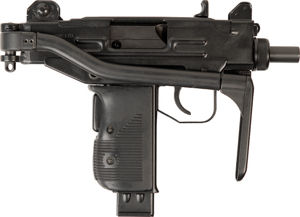 Good view of the muzzle...

"SpongeBob" fires his Uzi at police. Children's shows have certainly grown up.

José opens the box with Maverick.

Good view of the pump action.

José (now unmasked) with the Maverick.

Antonio (Mario Casas) uses Norinco Type 56-1 at the beginning of the film.

Another view of the the same scene.

Antonio carry the grenade on the belt.
Retrieved from "https://www.imfdb.org/index.php?title=Witching_and_Bitching_(Las_brujas_de_Zugarramurdi)&oldid=1147575"
Categories: