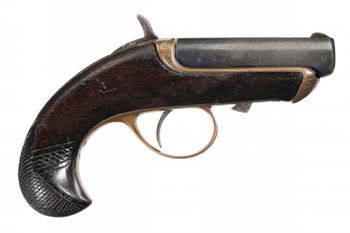 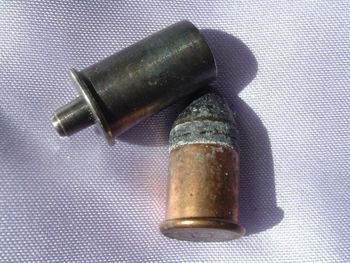 .41RF and the Black Powder Cap/Ball adapter for the Williamson Single Shot Derringer (1866-1870)

A small single shot derringer which is almost the same as the Henry/Philadelphia Derringer except that it is breech loaded instead of muzzle loaded. These where produced from approximately 1866-1870, and it is estimated that around 40,000 where produced. These little derringers came with different options of grips, finish, and engraving. There are many with nickel finish, fully engraved, pearl grips, ivory grips and fancier wooden grips.

They have a 2.5" rifled barrel that slides forwards to load the pistol. Rumour has it that they made just a handful of them in .38RF also, but they mainly came in .41RF (short), the same cartridge that the famous Remington 1866 Derringer fires. These are rather rare pistols.