War of the Dead 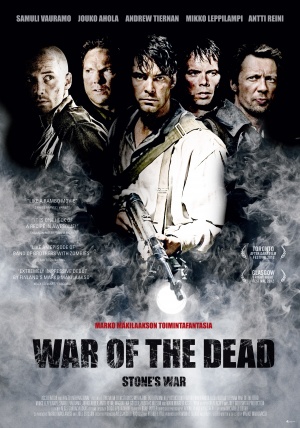 The following weapons were used in the film War of the Dead:

Kolya (Samuel Vauramo) surrenders what appears to be an anachronistic post 1947 Tokarev TT-33. Captain Niemi (Jouko Ahola) uses one as well and he apparently had only had one round chambered since the gun locks back after the first shot. Captain Martin Stone also carries one.

Captain Niemi (Jouko Ahola) about to fire his Tokarev TT-33 at a zombie (note the cocking serrations which identifies it as the post 1947 version)...

...and locks back after the first shot.

Kolya (Samuel Vauramo) surrenders his TT-33 when he encounters the remainder of the unit.

Captain Martin Stone (Andrew Tiernan) chambers his TT-33 before firing on a zombie on the roof of his car.

At least one Nazi soldier is seen with an MP38.

A soldier on the left with an MP38. Note how he is gripping the magazine, such a grip could damage the magazine and cause a misfeed.

Nazi, Finnish, and American soldiers also use MP40s as well.

A soldier on the right with an MP40.

A soldier takes aim with his MP40 during a Nazi ambush.

Kolya (Samuel Vauramo) with an MP40.

A PPSh-41 on a Finnish soldier's back.

Captain Martin Stone and Captain Niemi (Jouko Ahola) side by side with their PPSh-41s.

Some Finnish and Nazi soldiers are briefly seen with Mosin Nagant M1891 rifles.

A Finnish soldier shot while holding a Mosin Nagant M1891.

Another Finnish soldier shot while holding his Mosin Nagant.

A Wehrmact soldiers with a M1891 rifles in the background.

Finnish and Nazi soldiers are seen with Karabiner 98ks. Kolya (Samuel Vauramo) has one as well.

A Finnish soldier in the background with a Karabiner 98k.

A Wehrmact soldier firing his Kar98k rifle during an ambush.

Kolya (Samuel Vauramo) with a 98k.

A Finnish soldier is briefly seen with a Degtyarev DP-28.

A Degtyarev DP-28 in the foreground. This blurry shot is the only view of it.

A German soldier ambushing the American and the Finnish soldiers uses a Maxim M1910/30 presumably standing in for the Maxim MG08. 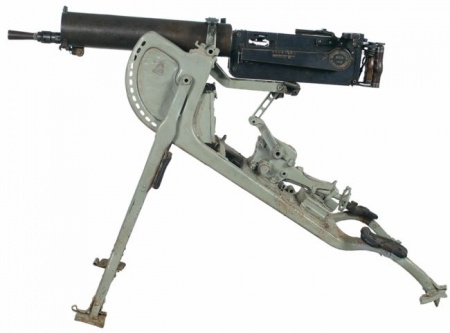 A German soldier firing a Maxim M1910 during an ambush. Note the top hatch on the cooling jacket.

A Finnish soldier is briefly seen with a MG34. A German soldier much later in the film uses one when ambushing Lieutenant Laakso and Captain Martin Stone in the Nazi bunker.

A Finnish soldier with an MG34.

A German soldier with an MG34.

Captain Niemi (Jouko Ahola) pulls out a Model 24 Stielhandgranate when more zombies show up after the initial encounter. Lieutenant Laakso (Mikko Leppilampi) later finds an entire box full of them in a Nazi bunker. Kolya (Samuel Vauramo) also gives one to an infected Russian soldier to spare himself from the infection.

An infected Russian soldier with a nearly armed Stielhandgranate courtesy of Kolya.
Retrieved from "https://www.imfdb.org/index.php?title=War_of_the_Dead&oldid=1217278"
Categories: