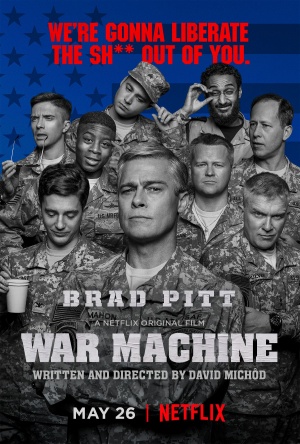 The following weapons were used in the film War Machine:

US Marines and US Army soldiers can be seen carrying M4A1 carbines.

US soldiers posing with Gen. McMahon carry the M4A1.

M16A2 rifles are carried by US and Afghan forces in the film.

LCDR Pete Duckman (Anthony Hayes), a US Navy SEAL on McMahon's staff carries a Olympic Arms K23B Tactical as his main weapon. Most likely, this is the same gun that was previously seen in Skyfall; the common denominator is that both productions sourced weapons from the same armory (Bapty & Co., U.K.)

Norinco Type 56-1 rifle is carried by guards securing the American base.

Norinco Type 56-1 rifle is carried by a guard.

What appears to be a AR-10 sniper rifle is seen on a table as Special Forces soldiers load up for a mission.

The sniper rifle is readied by SF.

The Beretta 92FS, standing in for the U.S. Military issued M9, is the standard sidearm carried by US forces in the film, notably by General Glen McMahon (Brad Pitt). 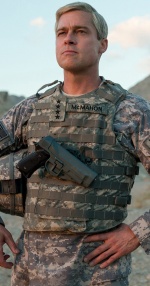 Production image of General Glen McMahon (Brad Pitt) with his Beretta holstered on his body armor.

A paratrooper version of the M249 is seen carried by US Marines. The machine gun is seen with a paratrooper barrel and a full stock instead of the collapsible version.

The SAW is seen being loaded by a Marine.

The SAW is handled by a Marine.

The SAW is being readied by a Marine.

The Browning M2HB heavy machine gun also can be seen mounted on US humvees.

The Browning M2HB heavy machine gun mounted on US humvee.

The M134 Minigun is seen mounted on US Blackhawks, notably the one carrying McMahon.

M134 minigun mounted as doorguns on the Black Hawks.

US Marines also use the M4A1 with an M203 grenade launcher.

Cole about to launch another grenade. This carbine has been incorrectly assembled using the bottom half of the KAC RAS handguard with only a single rail rather than the correct top half which contains the side rails. Also note that this particular carbine is not an actual M4; it notably has a thin "pencil barrel" with no step for an M203 mount, and the flattop upper receiver appears to have been manufactured by cutting off the carry handle from an earlier upper.
Retrieved from "https://www.imfdb.org/index.php?title=War_Machine&oldid=1463090"
Categories: