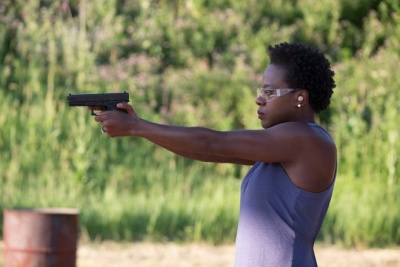 Viola Davis is an African-American actress well known for her roles as Amanda Waller in the 2016 film Suicide Squad and its 2021 sequel The Suicide Squad as well as Annalise Keating in the ABC series How to Get Away with Murder, a role for which she received the Primetime Emmy Award for Outstanding Lead Actress in a Drama Series. Davis also has appeared in such television series as Law & Order: Criminal Intent and NYPD Blue, in addition to her role as Officer Molly Crane in the Jesse Stone television film series. She has received three Academy Award nominations for Best Actress: for 2011's The Help, 2018's Widows and 2020's Ma Rainey's Black Bottom in addition to 2016's Fences, reprising her role from the 2010 Broadway revival and for which she received the Academy Award for Best Supporting Actress in 2017. With the Best Supporting Actress Academy Award, Davis became the first black actress to be the recipient of the rare "Triple Crown of Acting", having received an Academy Award for film, a Primetime Emmy Award for television, and a Tony Award for theatre. With her 2023 Grammy Award win for Best Audio Book (Narration & Storytelling Recording), Viola became one of only 18 performers to achieve the "EGOT" (having received an Emmy Award, a Grammy Award, an Oscar, and a Tony Award).