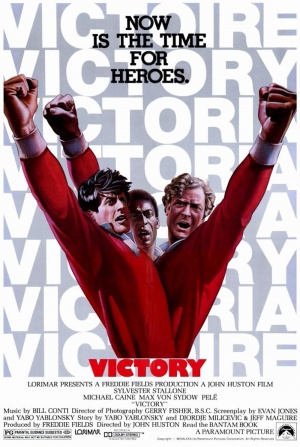 Victory (aka Escape to Victory) is a 1981 World War II drama directed by John Huston and follows a group of Allied prisoners of war who agree to form a football team to compete in an exhibition match against a competing German team. The film's cast included Michael Caine, Sylvester Stallone, and Max von Sydow in addition to several professional footballers in smaller roles, including Pelé.

The following weapons were used in the film Victory:

German soldiers at the camp and stadium are seen armed with Karabiner 98k rifles.

German guards hold up their rifles to resist the ensuing crowds.

The MP40 submachine gun is seen in the hands of German soldiers.

A German guard next to Robert Hatch (Sylvester Stallone) is armed with the MP40.
Retrieved from "https://www.imfdb.org/index.php?title=Victory&oldid=1296268"
Categories: