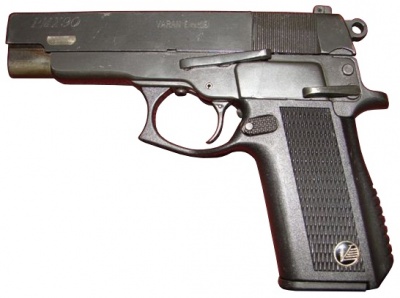 The Varan PMX-90 is a pistol which was manufactured in South Africa in order to circumvent the arms embargo which was in force against the then apartheid South African government from 1977 to 1994. Development of the pistol began in 1980, but it was not until October 1985 that the design was finalized. The pistol is unusual in that the top half of the pistols frame where it interfaces with the slide is metal, whilst the pistol grip and trigger guard are made from polymer, giving the pistol a distinctive appearance. Despite the pistols somewhat unusual outward appearance, internally the mechanism is based on that of the Browning Hi-Power. The Varan was relatively modern for its time, but it had several reliability, quality control and design issues. For example the magazine of the pistol (which was made from transparent polymer) had a capacity of 16 rounds, but it could not be fully loaded or it would flex and cause the pistol to jam.

The Varan PMX-90 and variants can be seen in the following films, television series, video games, and anime used by the following actors: