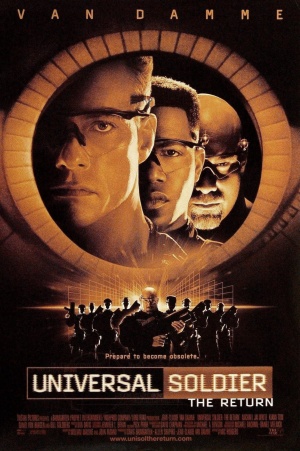 Universal Soldier: The Return is the second "official" installment in the Universal Soldier film series (a few direct-to-video films were released before this one). The 1999 sequel, which was directed by veteran stunt coordinator Mic Rodgers, once again stars Jean-Claude Van Damme as Luc Deveraux, one of the original genetically-enhanced super soldiers who must battle a new generation of Unisols. Van Damme would be reunited with Dolph Lundgren in the two more films: 2009's Universal Soldier: Regeneration and 2012's Universal Soldier: Day of Reckoning. These later films would contradict the events of the 1999 feature and thus this sequel is not considered part of the "canon" of the series.

The following weapons were used in the film Universal Soldier: The Return:

The main weapon of the UniSol 2500s in the film is a custom rifle/grenade launcher that appears to be modeled after the Objective Individual Combat Weapon or OICW. The "OICW" in this movie consists of a mocked up Heckler & Koch MP5 submachine gun with notable parts such as an M16-type magazine and a G3-type receiver for the overhead launcher. Luc Deveraux (Jean Claude Van Damme) is seen taking one from a Unisol to use near the end of the film. 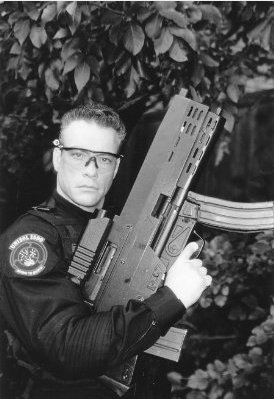 A publicity still of Jean Claude Van Damme with the "OICW". 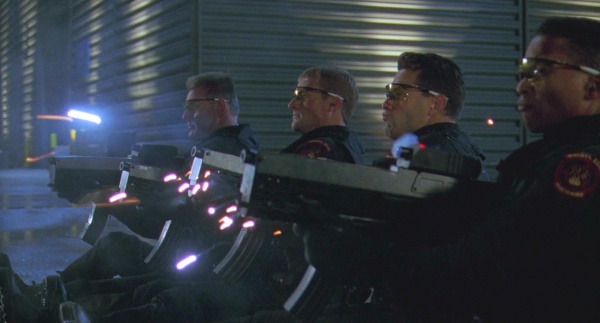 The UniSol 2500s open fire with their weapons. 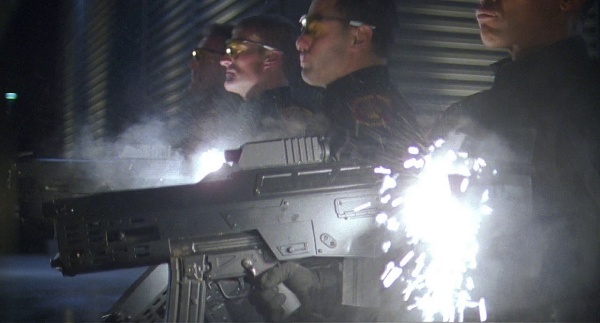 Sideview of the weapon shows the MP5 receiver and the fake M16-type magazine that is extended out to disguise the thinner 9mm MP5 mag. 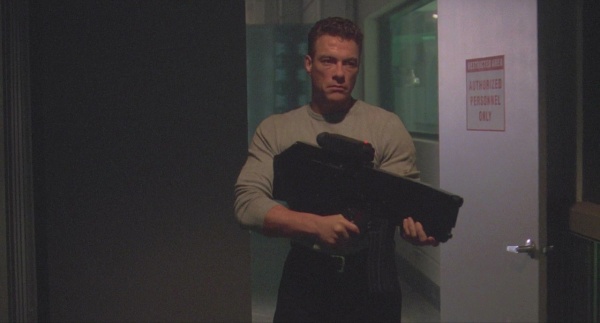 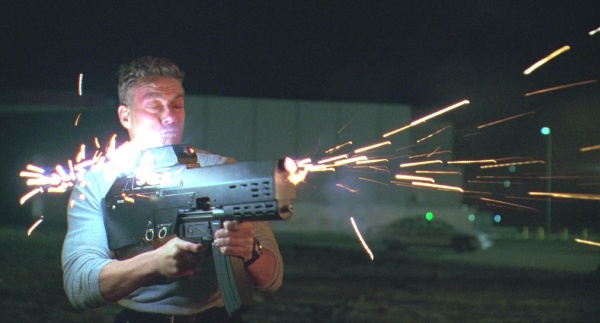 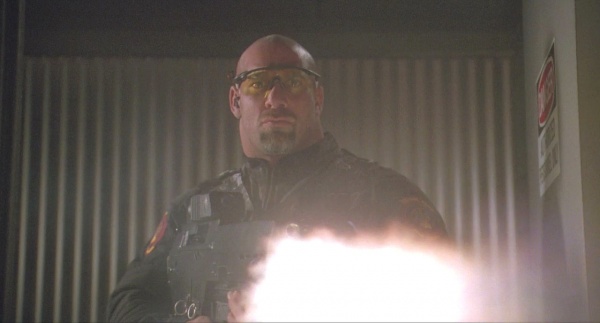 M16A1 rifles with M16A2 foregrips are used by the US Army when battling the UniSols. 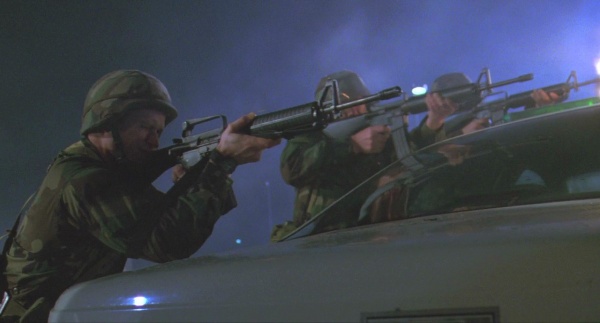 M16A1 rifles with M16A2 foregrips are used by the US Army when battling the UniSols.

M16 with A2 foregrips

Luc Deveraux (Jean Claude Van Damme) is offered an M16 rifle with M16A2 handguards before exchanging it for the M4A1 carbine with the M203 grenade launcher on the grounds that the M16 "would just piss them (the UniSol 2500s) off". 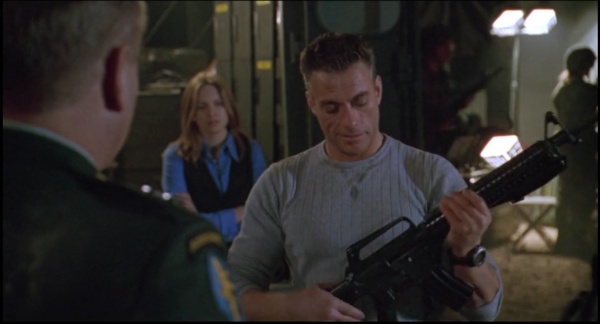 Deveraux handles the M16. Note the lack of a forward assist or magazine release fencing.

M4A1 carbines equipped with C-More Red Dot Sights and an RM Equipment M203PI grenade launcher attached via Snap On Launcher Assemblies (SOLA) are seen in the hands of US Army Rangers and Luc Deveraux (Jean Claude Van Damme) as they infiltrate the facility to do battle with the UniSols. A few of the Rangers also use M4A1s without M203s, which are equipped with Surefire M500 forearms with integrated lights. 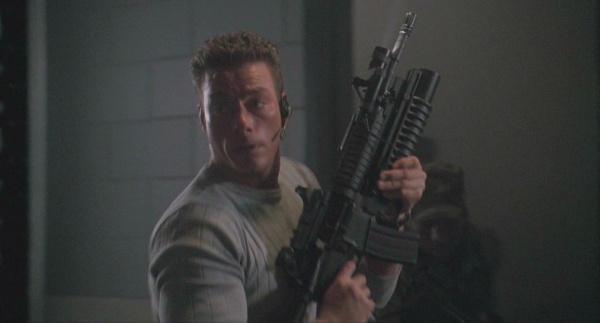 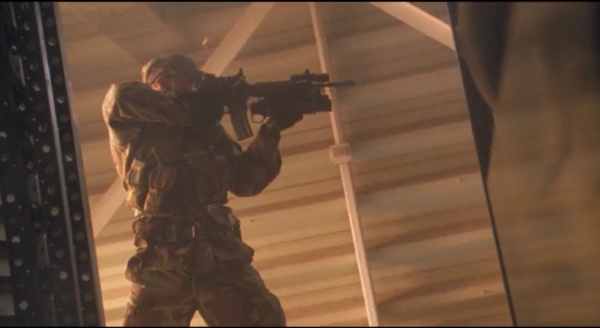 Maggie (Kiana Tom) is seen using an M1911A1 on the swamp boat during the opening mission. 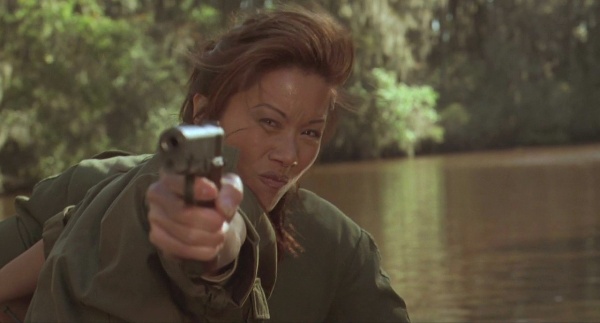 Security members escorting Deveraux and Erin Young out of the facility are armed with the Heckler & Koch MP5A3. 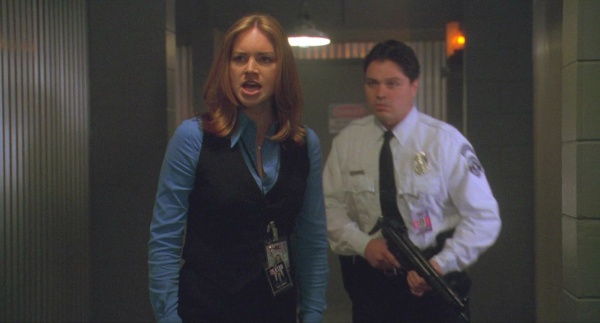 Security members escorting Deveraux and Erin Young out of the facility are armed with the Heckler & Koch MP5A3.

During the initial confrontation between the Army troops and the Unisols, both General Radford (Daniel von Bargen) and Captain Blackburn (Justin Lazard) use Beretta 92FS handguns. 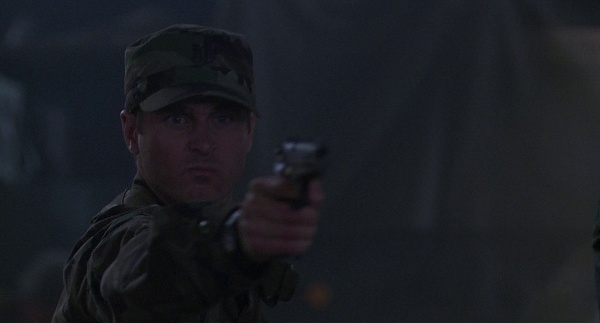 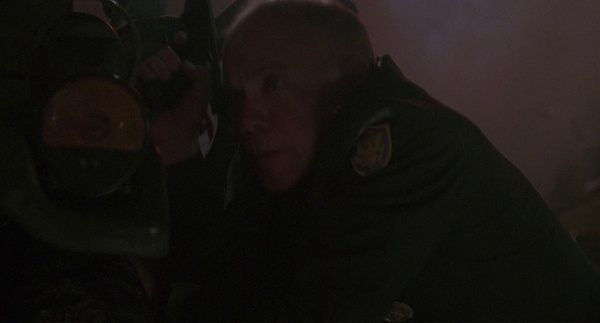