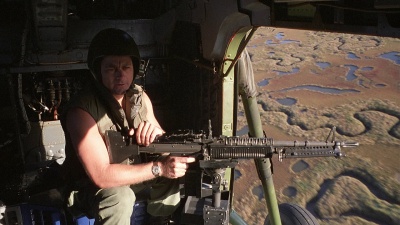 Tim Colceri as the Helicopter Doorgunner with the M60 in Full Metal Jacket.

Tim Colceri is an American actor who has appeared in such films as Leprechaun 4: In Space and Eraser. Prior to his acting career, Colceri was served 13 months as a US Marine stationed in Da Nang during the Vietnam War. Colceri was originally cast as Gunnery Sergeant Hartman in 1987's Full Metal Jacket, but was subsequently replaced by fellow Marine and former drill sergeant R. Lee Ermey (Colceri subsequently appeared in the film as the helicopter doorgunner who opens fire indiscriminately on targets below).