From Internet Movie Firearms Database - Guns in Movies, TV and Video Games
(Redirected from The Crazies (2010))
Jump to navigation Jump to search

The Crazies is the 2010 remake of the 1973 George A. Romero film of the same name, directed by Breck Eisner and produced by George A. Romero. The plot of the remake once again, revolves around a small town that is accidentally infected with a biological weapon codenamed "Trixie", which either kills its victims or turns them into mindless, bloodthirsty killers (similar to the Rage-infected victims from the film 28 Days Later), the efforts of both the surviving townsfolk attempting to survive and stay alive, and the efforts of the United States military to isolate the threat and eliminate it. However, in this film, the location of the small town has been changed from Evans City, Pennsylvania, to the fictional town of Ogden Marsh, Iowa, and the general focus of the plot revolving more around the surviving townsfolk and not so much on the military's quarantine efforts. Nevertheless, the film received much positive reception and was a better financial success compared to its predecessor. The film's cast includes Timothy Olyphant, Danielle Panabaker, and Radha Mitchell.

The following weapons were used in the film The Crazies:

Sheriff Dutten (Timothy Olyphant) carries a Glock 19 as his sidearm. He is seen using it against Rory Hamill in the film's opening and later on when he is searching the town's morgue.

Dutten draws his Glock 19 on Rory and kills him with a single shot.

Dutten with his Glock 19 while searching the morgue.

Two more shots of Sheriff Dutten with his Glock 19 as he inspects some bodies in the morgue.

Deputy Russell Clank (Joe Anderson) finds a Glock 26 in a crashed SUV. He takes it for himself and threatens David and Judy with it, but is later disarmed of it by David.

Good side view of the Glock 26 as Russell draws it on David and Judy.

Later on though, David manages to disarm Russell and holds the Glock 26 on him briefly to knock some sense back into him.

Sheriff Dutten (Timothy Olyphant) retrieves a Smith & Wesson Model 27 with a 3.5" barrel from a lockbox in his desk after the military confiscates his Glock and other weapons at the station. He loads it with .38 Special cartridges as seen on the headstamp. The backstory of the weapon reveals that David's father was the former sheriff of the town and surrounding county, and the Smith & Wesson Model 27 was his duty revolver. 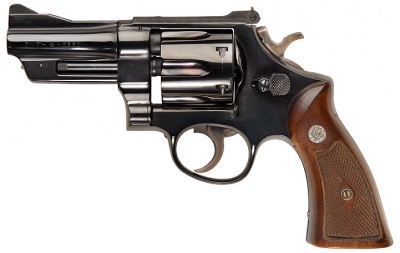 Dutten opens the lockbox to get his father's Model 27.

Dutten loads a single round as he hears someone approaching. Note "FEDERAL 38 SPECIAL" markings on the headstamp.

Deputy Clank (Joe Anderson) later acquires the Model 27 and finishes off the infected Curt and Peggy Hamill after they are already down.

Dutten (Timothy Olyphant) with his Model 27 drawn while going through the car wash for cover from the helicopter.

Only to have it knocked away from him by the attacking Crazies in the car wash.

Judy Dutten (Radha Mitchell) readies the Model 27 as both her and David attempt to escape the truck stop.

Jesse draws an unknown Smith & Wesson semi-automatic pistol on Sheriff Dutten at the truck stop. The pistol is not seen clearly enough to identify, but it appears to be a third generation Smith & Wesson semi-automatic because of its distinctive 4" barrel, slide, grips, and trigger guard. The pistol has a round trigger guard and no decocker-safety combination on the slide. It's entirely plausible that it is a Smith & Wesson 5946. There also appears to be an object by the grips, so it could also be a 5926 with a frame mounted decocker, but it could just be a glare from the slide release.

An infected Jesse draws his unknown Smith & Wesson auto on David, but is set on fire by David before he can fire off a shot.

In the beginning of the film, Rory Hamill (Mike Hickman) walks onto the baseball field with a full length Rossi Overland double barrel shotgun.

Rory looks at his shotgun as Dutten questions him.

When the three hunters discover the dead plane pilot in the swamp, one of them carries an Ithaca 37.

A hunter with an Ithaca 37 as the trio makes their way through the swamps; note that there is no side ejection port. Ithaca makes their shotguns eject from the bottom. Also note that the shotgun pump is in cocked-back position.

Russell aims his Ithaca while at Scotty's barn.

Russell with his Ithaca while going through the car wash.

What possibly could be a Mossberg 930 is used by one of the hunters in the swamp and later when they are seen killing Crazies in the deserted town center.

Note: It may be a Marocchi A12 semiauto shotgun based on the shape of the forend.

The hunter blasts away at an infected citizen with his possible Mossberg 930 or Marocchi A12 shotgun as chaos unfolds in the now-abandoned town.

One of the hunters, Jesse (Brett Wagner), carries a Remington 870 in the swamp.

Jesse with a Remington 870 as the trio makes their way though the swamps.

The Colt M4A1 Carbine is used by various U.S. soldiers, usually with 4x ACOG scopes and flashlights. At one point in the movie, a soldier aims down the scope, but a red flash is emitted like it is a laser sight.

A soldier's M4A1 is seen with an AN/PEQ-2, Knight's Armament RAS and Vertical forward grip, and M68 CCO mounted on a backwards cantilever mount when Sheriff Dutten is apprehended along with his wife. Strangely, the dust cover of the gun is closed in this scene.

Another soldier's M4A1 is seen with an AN/PEQ-2, Knight's Armament RAS and Vertical forward grip, unidentified ACOG, and left mounted flashlight as he directs the evacuees at the truck stop outside of Ogden Marsh.

Pvt. Babcock (Joe Reegan) enters a barn to an ambush by Dutten and Russell.

The forend of the M4 on the right, showing a clear view of the handguard and optic setup.

One of the infected hunters is armed with an M4A1 in the film's climax, presumably stolen from the military occupants who were there prior.

One of the soldiers in the clean tent has an M16A2.

The soldier with the M16A2 in the center.

Scotty with his Remington Model 700 BDL. This shot from the trailer is reversed from what the actual film shows.

Dutten with Scotty's rifle as the group prepares to leave Scotty's property.

Russell fires the remaining rounds from the rifle after getting tired of carrying it.

One soldier uses an unidentified flamethrower to burn bodies at a farm.

An AH-1G HueyCobra that pursues Dutten and his companions as they try to escape the town by vehicle is armed with a chin-mounted M197 Vulcan.