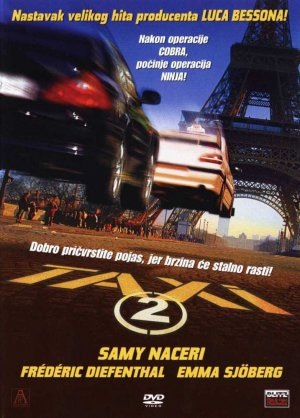 Taxi 2 (also known as Taxi Taxi in certain European countries) is a French action-comedy, the sequel of Taxi (1998). Emilien, the clumsy police inspector and Daniel the taxi-driver team up once again to rescue the Japanese minister of defence from the Yakuza. The film was written by Luc Besson, who also wrote the screenplay for the original film.

The following weapons appear in the film Taxi 2:

One of the RAID commandos fires a Beretta 92FS pistol during the fake ambush of the convoy. (Note: The gun can also be a PAMAS G1.) 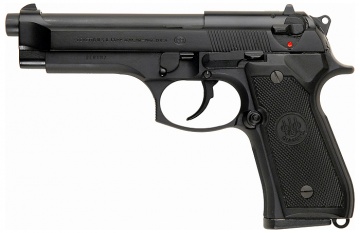 The French RAID commando takes aim with the 92FS. 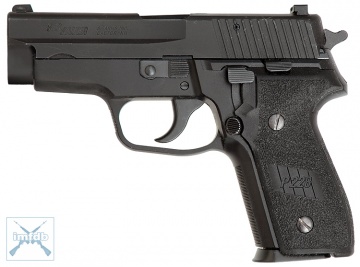 Emilien points his P228 at the ninjas.

Emilien points his P228 at the ninjas.

Emilien with the SIG-Sauer after rescuing Petra and the Japanese minister of defence.

Emilien finds out that his pistol wasn't loaded for safety reasons.

The guard on the right holds a P90.

Some of the fake Yakuza members and French RAID commandos are firing MP5A3's with slimline forearms and SEF trigger settings.

The fake Yakuzas fire their MP5A3's.

Same scene from a different angle.

One of the RAID commandos in the background fires his MP5A3 submachine gun.

One of the fake Yakuzas uses a Heckler & Koch MP5K during the fake ambush.

The fake Yakuza fires his MP5K at the minister's vehicle.

One of the Yakuza guards carries an AIMR carbine.

French soldiers are holding FAMAS F1 rifles when they surround the Yakuza's car near the end of the film.

French RAID operators use FN FNC assault rifles with harpoon launchers mounted under the barrel during the fake ambush scene. They use the harpoon guns to pull the fake Yakuza members' vehicle away from the ambush location, with the help of a few ATV's.

The RAID operator prepares to fire the under-barrel harpoon gun attached onto his FNC.

Another RAID operator with the FNC / harpoon gun combo. An unmodified FNC is also seen in the background.

The Yakuza leader uses a Micro Galil (Galil MAR) with 35-round magazine in the film. Some other Yakuzas are also seen with Micro Galil rifles.

The Yakuza leader prepares to shoot at a van with his Micro Galil.

Another Yakuza member with a Micro Galil assault rifle.

RAID commandos are using Swiss Arms SG 552 Commando rifles during the fake ambush and at the warehouse during the apprehension.

One of the RAID commandos fires his SG 552 Commando fitted with a 30-round magazine.

Another officer with a 552 Commando at the dock warehouse.