I'll have to watch the movie again to confirm, but I vaguely remember these guys having Ranger tabs on their uniforms. I don't think they were regular Army. Spartan198 15:58, 24 May 2009 (UTC) Spartan198

The Army convoy that Robbie tries to join up with is the 29th Infantry Division of the Army National Guard, the hill battle were marines & Army. --AdAstra2009 03:26, 7 December 2009 (UTC)

I seemed to recall from somewhere that 10th Mountain was the only regular army unit issued with Carl Gustav. Don't know if that's true or not though... As for the hilltop battle, I also remember seeing A-10 blasting their awesome 30mm Avenger cannon and at least one F-22 as well.--Wildcards 19:02, 17 September 2010 (UTC)

I'm afraid there weren't any Warthogs or Raptors in this movie. The only fixed-wing air assets (jets) I saw were F-15's and F-16's at the start of that scene, followed up by CGI AH-1W's that had no landing gear skids and white Hellfires that they volley-fired at the off-screen tripods. Orca1 9904 21:15, 17 September 2010 (UTC)
The first aicraft that flys over and fires a missile is an F-22A followed by a flight of F-16C's. I dont seem to remember any A-10's though 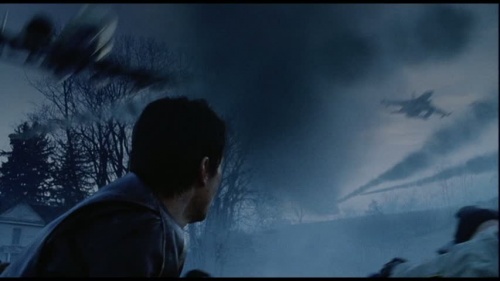 Slow the video down to its slowest and at the 11 second mark after the opening missile is fired, you can see the diamond shape of its fuselage, then at 12 seconds you can clearly see the port side wing behind the missile's contrail. Spartan198 (talk) 09:47, 4 February 2017 (EST)

Hey, question for anyone here regarding the hilltop battle between the tripods and the marines. My friend's roommate (a rather unpleasant guy) said those men were, and I quote, "Fucking stupid." I don't admit to any detailed knowledge of tactics, so I couldn't counter him. So I want to ask, was there a better way the marines could have done that scene?

Firstly, on discussion pages remember to sign your posts so people know who is talking. To do this you can either just type ~~~~ at the end of your comment or hit the signature button at the top of the edit window and it will automatically put in a signature and a timestamp. As for the actual question, it is kind of stupid for him to say that as you don't really see anything of the actual battle do you? All you could see is that they were firing a load of missiles at the tripod at the same time and trying to fire as many guns at it as possible, which seems like a pretty solid strategy against a giant walking thing with a seemingly impenetrable shield that you have no real idea how to fight. You could argue that it was stupid to try and fight it, but I think there is a line where they say something about how they are just trying to buy time for the civilians to escape, so in that context it makes sense. --commando552 (talk) 14:16, 9 February 2017 (EST)
Thanks for the prompt reply, and I do apologize for that, just made an account earlier. I thought I heard a line about delaying the tripods advance, which personally I think would take guts to do. Thanks for your time. SomeRandomGuy123 (talk)

The two on the right, closest to the camera, look to me like Apaches rather than Cobras judging by the angle of the canopy and forward position of the engine nacelles. The ones in the background are clearly Cobras. Spartan198 (talk) 04:04, 14 August 2020 (EDT)

They look more like Cobras to me. Note the dividing frame between the front and rear canopy, biased forwards and forward sloping like a Cobra whereas on the Apache it is farther back and more vertical. Also, the engines an an Apache are not noticeably farther forward than on a Cobra (if anything they are farther back), and they have obvious domes on the front of the intakes which are absent here. Lastly, the rotor is mounted on a raised tower like on the Cobra. I think part of the problem is that these are kind of wonky CG models with a number of inaccuracies, but I am fairly certain they are meant to be some sort of AH-1W variant. --commando552 (talk) 17:55, 14 August 2020 (EDT)