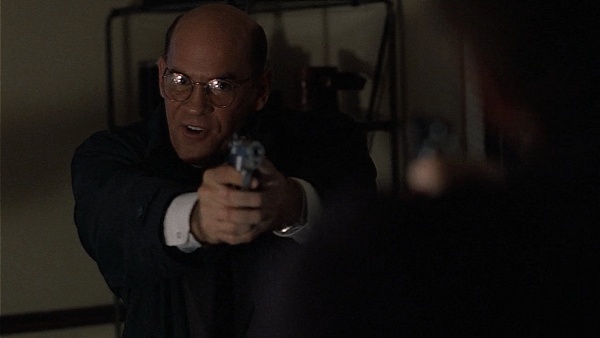 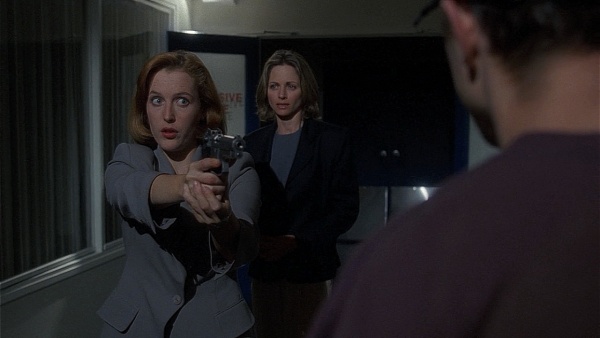 Special Agent Dana Scully (Gillian Anderson) aims her Smith & Wesson 5906 in "D.P.O." (S3E03), the first episode in which both she and Mulder carry the weapon. 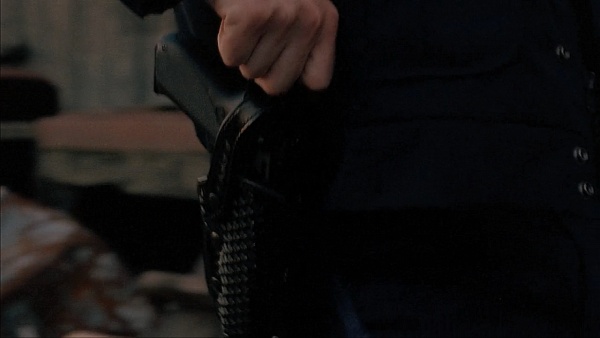 A Cleveland police officer unlatches the holster containing a S&W automatic (likely a 5906) near the beginning of "2Shy" (S3E06). 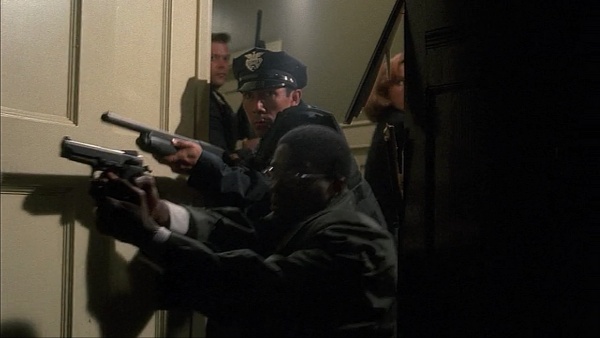 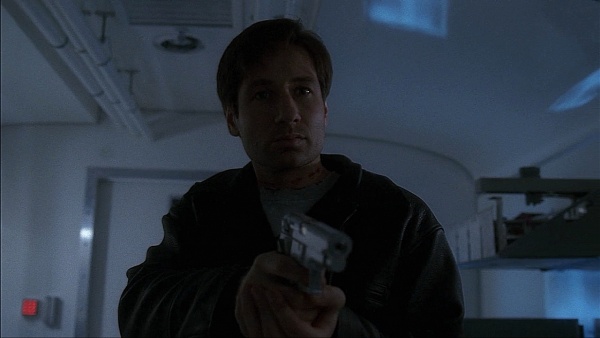 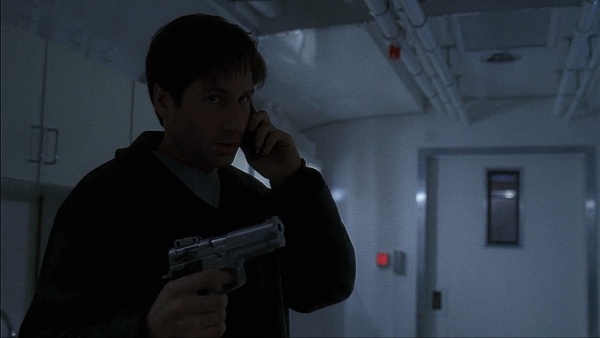 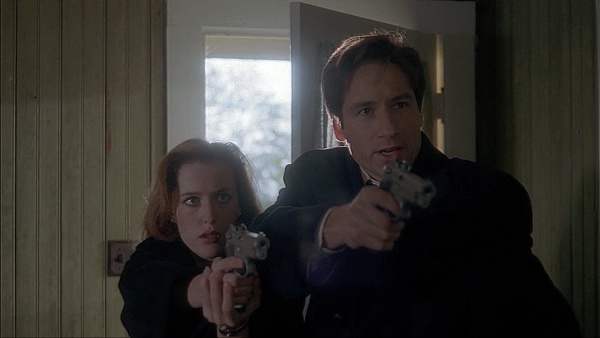 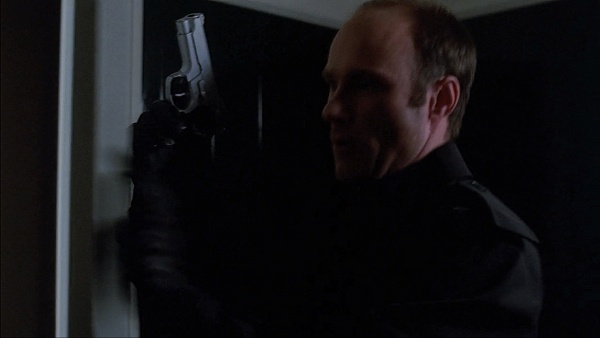 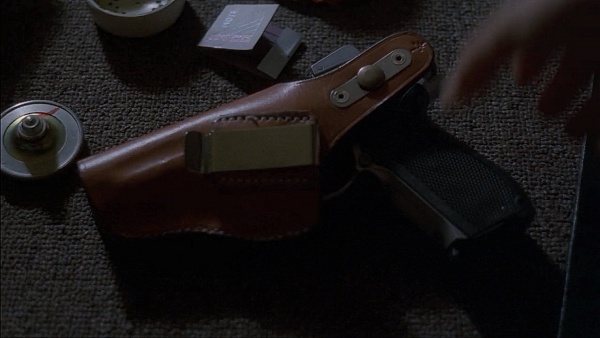 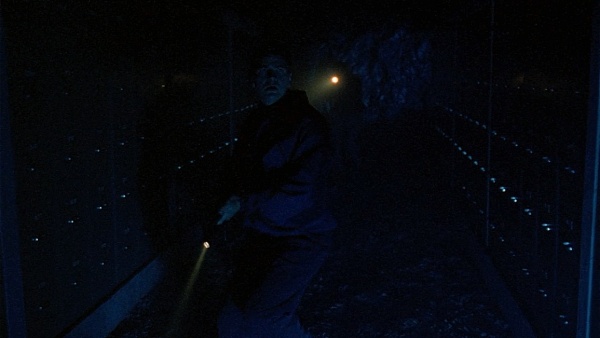 An operative with what appears to be a Heckler & Koch MP5A3 with mounted weaponlight in "Paper Clip" (S3E02). 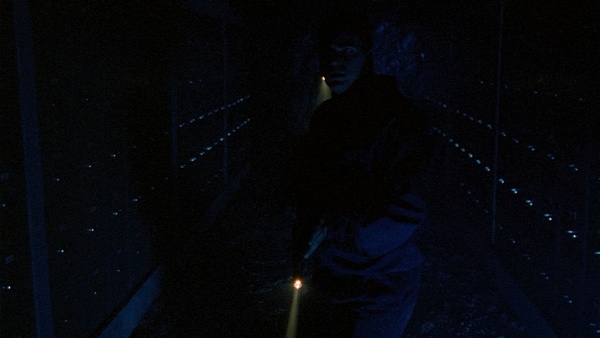 An operative with what appears to be a Heckler & Koch MP5A3 with mounted weaponlight in "Paper Clip" (S3E02).

Not sure what this is, but I don't think it's an MP5A3 because it doesn't seem to have the front sight. In S3E16, one of the soldiers is briefly seen with a Calico M950 and he holds a flashlight underneath the barrel - I wouldn't be surprised if that same gun appeared in this episode first (in this screencap). -MT2008 (talk) 11:41, 10 September 2014 (EDT)

The PA3 is spot-on, in fact I had thought it looked a lot like the one in Reindeer Games, makes sense. I had first thought it was the shorty Ithaca we see later in the show, but this gun has a side eject port and the Ithaca had no folding stock, so again I'm with ya there. As for the MP5, I'm quite that's what it is - It's damn hard to tell anything in that picture though.. I had thought it might be a Calico, but I remember watching it and seeing the general layout/shape of the MP5, including a box magazine. Both pictures kinda suck (this one especially), I'm hoping to get slightly better ones and enhance 'em better if I can. StanTheMan (talk) 12:41, 10 September 2014 (EDT)

Hmmm, I think you are right, it does look like it has a box magazine of some kind, so Calico is out. Not sure it's an MP5 with a Surefire grip, though, because as far as I can tell, they did not have Surefire forearms until "Nisei" (S3E09) - giveaway is that in the opening scene of S3E09, the soldiers who kill the Japanese scientists use MP5s with the slimline forearm, and then they suddenly have Surefire forearms in the middle of the episode when they are searching for Mulder on the ship. Which suggests to me that the armorer got Surefire 628s in stock for the first time during filming of the episode and immediately installed them on the MP5s. But I could be wrong. -MT2008 (talk) 13:11, 10 September 2014 (EDT)

This is true about the Surefire forarms - I've just today capped stuff from "Nisei" and "731" and your info tracks to a T there, they don't have the forarms at the start but do midway through. In the earlier episode's case, again, I'm sure it's an MP5, but I agree it might not be a Surefire setup but maybe something else. Again I'll go back and try to get more shots here. But I don't expect much on the old standard-def quality though. One saving grace is that they are remastering the whole show so hopefully it can all be definitively answered in due course. StanTheMan (talk) 22:08, 10 September 2014 (EDT)

You have caps of those episodes? Excellent. I do, too, but I've refrained from posting due to quality issues. You want to post yours? They'll be better than mine, most likely.

Hey, I kept some of your images since the quality seems to be about the same (I can skate a bit more by brightening and sharpening on some images, but that can only help so much, especially on some shots). Anyway, I'm gonna upload those images and some from another episode or two in a bit. As for your caps, hey if they're good enough and/or stuff I didn't cap myself I'll use them too, I know you had to put some work in there and if they work, why not. If you have stuff for other episodes, post that up here in the talk page, too. I'm still gonna go through all the episodes nevertheless, but if there's even a bit less I can do (and a bit someone else can help) again, why not? As for the MP5A2s in the opener.. I don't recall seeing any, I think they're all A3's, even the airsoft pieces. I'll recheck later on though. I'm going in sequence so I ain't made it but halfway in the season here ("Wetwired" being the sole exception - I just picked that as something to watch the other week and so it was already in the list and I remembered where most of the guns were in that episode, so I went ahead and got it, too.) StanTheMan (talk) 13:37, 11 September 2014 (EDT)

Later today, I'm going to go ahead and post some pics from "Pusher" (S3E17) because I have that episode capped pretty throughly - it features the MP5A3s quite prominently, plus the Taurus Model 66 (which is already on the page, but I have a few more images I want to include), XM177s, and that long-barreled sniper AR-15 A2 that was in Dreamcatcher and The Outer Limits.

Sounds good, thanks. Also thanks on the spot for the A2, I'll try to get it there, if not in the later episode. I also noticed the M14 variant (the flash hider's quite distinctive) but as you said, it's hard to see - Only remotely decent shot of it is in the firing squad shot, and even then it's still damn difficult to see. I might still try and get a second cap and mark it out though. I believe there's also a CAR/XM177/Commando variant in "731" as well (At least, a rifle with a collapsible stock anyway, that's all I really saw) Also I saw a shoulder-arm in "Nisei" that looked kinda like the forend of a USAS-12 (it has a fairly long yet plain barrel with no sight or flash hider, and the barrel itself seemed too thick to be for a rifle like a FAL variant). It's seen in a dark/shadow shot so it's almost impossible to confirm. Bah, all-told I long for that HD remaster, and I'm sure I'm not the only one. Anyway, yea, I'd be happy for the images, whatever you can add would be great. Thanks again. StanTheMan (talk) 17:34, 13 September 2014 (EDT)