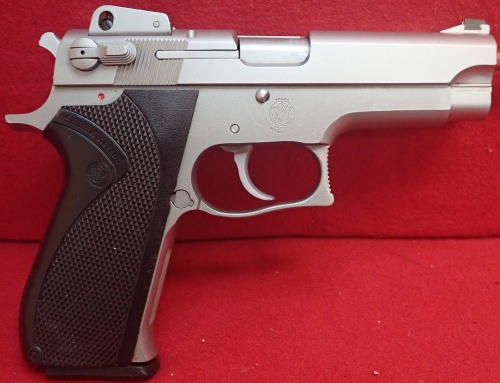 It's no mystery. I took that pic. I digitally removed the rest of the serial number and left the 1138 intentionally. I always removed the back half of the S/N on the guns I photography for privacy reasons. MoviePropMaster2008 08:39, 25 September 2009 (UTC)

Just to double check, even though this pistol has a recessed hammer, it is still Double/single action right? -Anonymous

So...the 3913NL was made just for idots who couldn't deal with having "Ladysmith" inscribed on their gun? That's kind of pathetic. -Anonymous

Kind of the same concept of carrying a gun with pink grips yet more descrete. I would prefer a NL version anyway.--FIVETWOSEVEN 03:38, 6 January 2011 (UTC)

Why, the weapons are identical. -Anonymous

If they were the same price and in the same condition, and I could only pick one, I'd go with the NL. But I certainly wouldn't say no to a gun just because of what's written on it. (Speaking of, my buddy's Walther P99 has a serial number that begins F-A-G. It's etched in gold letters in three places on the gun. At least Ladysmith is only on one side.) --funkychinaman 05:05, 6 January 2011 (UTC)
Would you drive a car aimed at women such as a small convertible Anom? Sure its a small car but it still gets you to where you want to be and its just a title set by others right? When I actually decide to get one of these, I'm looking for the NL model.--FIVETWOSEVEN 02:27, 7 January 2011 (UTC)