Saiga-12K Tactical - 12 gauge. The Saiga Tactical (Russian: Сайга Тактика; Saiga Taktika) is the collective name for a series of customized Saigas produced by Russian company Legion Ltd. (Russian: ООО «Легион»), which feature a diverse array of attachments, including AK-74 and SVD-styled components. Their main difference with the factory Saiga shotguns is their AK-styled iron sights. 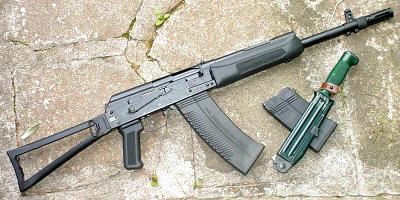 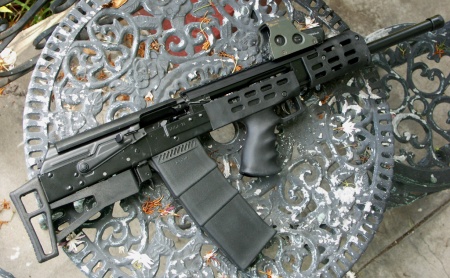 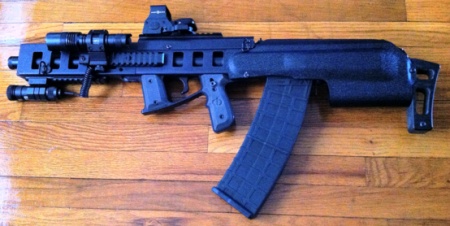 A heavily customized Saiga-12 by the Hatcher Gun Company (H.G.C.)

A heavily customized Saiga-12 by the Hatcher Gun Company (H.G.C.)

Are you sure its select fire? according to World guns.ru its semi-auto only [1]5t3v0

From the factory they are Semi-Auto but numerous end users have converted them into Automatic shotguns. Rockwolf66 20:23, 13 August 2009 (UTC)

The Saiga shotgun series are the most reasonably priced semi auto shotguns I have yet to encounter-S&Wshooter 19:39, 13 August 2009 (UTC)

Given that they used the AK-47 as the basis of their design, it shouldn't be surprising that they're not too expensive, compared to other shotguns like Benelli or Franchi. Orca1 9904 01:34, 28 August 2009 (UTC)

How much does it cost in the U.S.? In Russia, Saiga-12 costs about $ 700. Saiga is the most popular weapon of self-defense due to the fact that we are prohibited from buying pistols in private use (although allowed to buy semi-automatic rifles, such as the Steyr AUG, AR-15 or AK-47 with 10-round magazine. We can also buy these rifles and as AWP). In addition to the Saiga in Russia is rather popular weapons such as the Remington 870 or Mossberg 590 (it costs about $ 1200). But such a weapon as the Benelli M4 (M1014) is less common because it costs about $ 3500 and it is being bought by professionals who are addicted to practical shooting. Slow Rider 13:48, 23 January 2011 (UTC)

Why are they so hard on Saiga 12's over here in America in the first place?

Honestly it is because the BATFE burocracy are a bunch of whores to the US political left. Just look at the reasons the declared the USAS-12, Striker-12 and Streetsweeper shotguns to be destructive devices.There was no need to do so but they banned them anyways. The Saiga 12 can take high capacity drums and is based on the AK-47 so they have their little lace panties in a twist.Rockwolf66 04:39, 24 January 2011 (UTC)

We have about the same shit on handguns. Government and Parliament probably think that our citizens are idiots, and if they allowed us to carry handguns, we've killed each other. But actually, no massacre with the help of their semi-automatic rifles or shotguns multiply. And I do not know what will change if there were handguns.Slow Rider 09:13, 24 January 2011 (UTC)

Unfortunately, I doubt it, as there is still uncertainty of whether the AK-12 will ever go into full scale production. Izhmash is sort of in a financial struggle right now and certain critics of the AK-12 believe that building another AK pattern rifle for the adoption into military service is just beating a dead horse and how Russian Armed Forces require a wholesomely new and modern rifle by now.--BeloglaviSup 09:59, 7 July 2012 (CDT)

It's a tricky case. In Russian gun manuals the names are used with hyphens. But the English version of the web site of Concern Kalashnikov uses names without hyphens: Saiga 12. Greg-Z (talk) 10:22, 10 June 2017 (EDT)

In such a case, I would normally go with the Russian labeling, but the thing is that these commonly interfere with the English-language labeling (e.g. the AK-47 is the most commonly known as such, despite the original Russian name being AK). So I guess it would be the best to refer the Saiga 12 without a hyphen, eh? --Ultimate94ninja (talk) 04:18, 11 June 2017 (EDT)

Ironically, the image in the page that you linked shows a hyphen in the inscriptions on the weapon image. Another fun fact: the same website lists this with a hyphen (this one is from the military section rather than civilian). I don't know what to say... Best way is to stop caring too much about it lol. --Ultimate94ninja (talk) 15:48, 23 July 2017 (EDT)