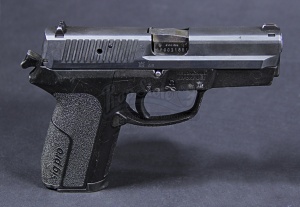 Screen-used hero (deactivated) SIG Pro SP 2009 (serial number SP0031651) from The Bourne Identity. Note that the magazine does not seem to be the one that appears in the film. Image from Prop Store of London.