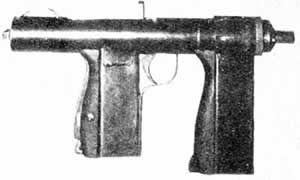 Another of the weapons in Kaminsky's arsenal is a very compact machine pistol that has an extremely high rate of fire. This gun appears to be a Cellini-Dunn SM-9, but it obviously lacks the forward grip in front.

As done loads of times, It may be a 'modified' one for the movie to look like a different weapon. The Armourer may have thought a front grip on such a small SMG is pointless and the SM-9 would be ideal as a clandestine PDW. The muzzle my have been installed not much for vanity but to reduce barrel climb so it can be handled without the front grip. It reminds me very much of the British MCEM 1 machine carbine.

Does anyone know frack all about the SM-9? When was it first manufactured? My Google-fu is weak.

The gun that Kaminsky gives to Baxter at the end I think it is not a Colt Detective Special. Look at the adjustable target rear sight. I feel, this revolver is a Smith & Wesson model 15 "Combat Masterpiece" with a short 2-inch barrel, built on the medium-sized K frame. It appears as if the ejector rod ain't shrouded, so it likely not a M19 "Combat Magnum".

Maybe they switched guns in the live firing scene. You can see the fake foward assist in one of the screencaps.--Oliveira 21:06, 10 November 2009 (UTC)

All of the handguns which appear in Raw Deal are revolvers, and I'm sorry to say that I don't know a whole lot about revolvers (if you're my age, they're just inherently less interesting than the high-capacity semi-autos that have been featured in action movies since the late-80s). So, here are lots of screenshots showing off the various wheel guns seen in the movie. Feel free to identify them and sort them out.

I remember reading an article in "Combat handguns", written by Jerry Ahern, when the movie was first released, where he mentioned that a Charter Arms Bulldog was used in the movie, but I am not able to identify it in these pics.

I think the Charter Arms Bulldog might be Patrovita's gun, seen in the 5th and 6th screenshots.

I don't think that Patrovita's revolver is a Charter Arms Of Duty. In the second picture it showed cleary a 6 shot cylinder. 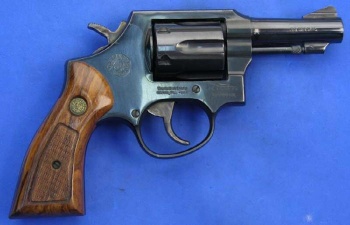 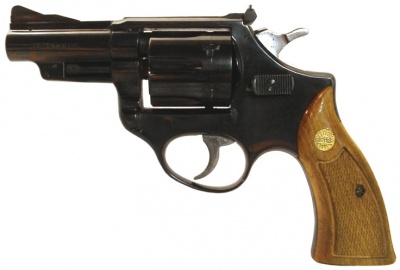 Astra 357, 3 inch barrel. Note the shape of the hammer and the rounded front of the frame, different of the square frame of the S&W N-frame