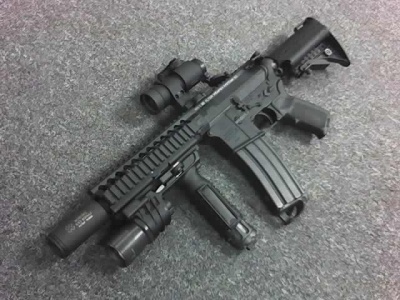 Purpose of the muzzle attachment on this carbine?

The photos of this weapon on its page show a cylindrical muzzle attachment whose function is not described in the photo captions. It's too short to be a sound suppressor, and I don't see the cutouts that would normally go on a flash suppressor. --Mazryonh 17:48, 12 December 2011 (CST)

It is the Noveske KX3 flash suppressor. It is essentially just a short tube that is full open at the front. Its purpose is not to reduce the flash visible from the front like on a traditional flash suppressor, but to direct the flash and sound forwards rather than to the sides. It is intended to be used on short barrelled rifles where the the powder isn't fully burnt by the time the barrel ends, so the flash and sound is very intense as the gases explode out of the muzzle. The only purpose of the KX3 is to direct this explosion forwards rather than to the sides where it would be potentially dangerous, or at least uncomfortable, when firing from such a short barrel. --commando552 18:25, 12 December 2011 (CST)

Silly me. I should have read the literature on Noveske's products on their website. So this flash suppressor isn't going to be very effective at hiding the flash from the enemy (you'd probably need a sound suppressor for that, which would negate the compactness of this weapon), but should preserve the user's night vision. I must say, though, that unless the person being protected (this is supposedly a weapon optimized for security detail) is always wearing hearing protection, they'll stand a good chance of being deafened should the need arise to fire this 7.5-inch carbine unsuppressed. I suppose that without expanding rounds or the special Mk 262 FMJ round the stopping power of this carbine would be fairly low as well. --Mazryonh 23:59, 12 December 2011 (CST)

Anyone have any objection to changing the name of this page to allow it to include other Noveske rifles, such as the CQB seen in Transformers: Dark of the Moon. Normally would call the page "Noveske Rifleworks rifle series", but does that look weird with the two "rifle" words in a row? --commando552 11:14, 16 December 2011 (CST)