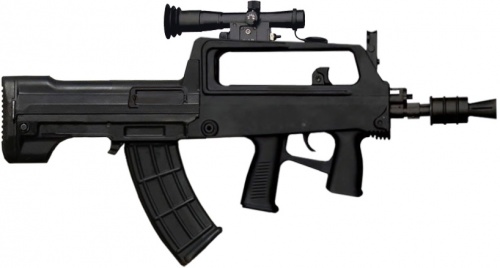 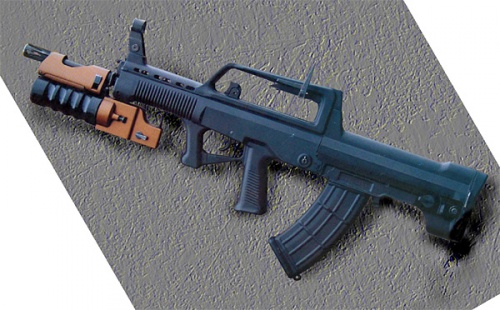 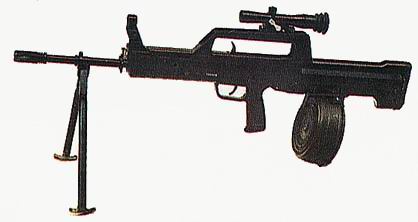 Emei Type 97 NSR (Canadian civilian version of the QBZ-97) with T97.ca LHG (Lower Hand Guard) and FTU (Flat Top Upper) modifications - .223 Remington. It is not to be confused with the factory "Gen 2" FTU variant of the Type 97 NSR. 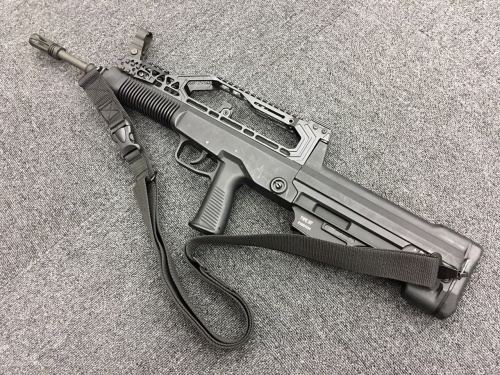 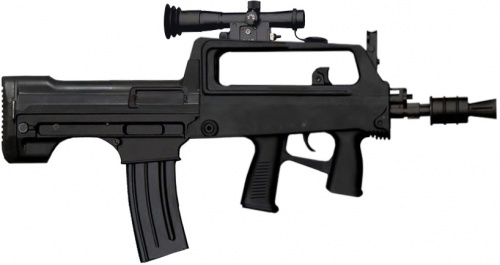 Keep the QBZ-97 carbine as the QBZ-95 carbine because 95 designation means the chinese 5.8x42mm round while the 97 designation refers to the export models which are chambered in 5.56x45 mm NATO and uses M16/AR15 STANAG magazines.

I remember hearing somewhere that the 5.8 round performs very poorly-S&Wshooter 03:43, 20 August 2009 (UTC)
Just to add on questionable reliability. I saw a Chinese propaganda video on youtube showcasing the weapon system. The guy demoing claims it works after being dunked in water like the HK416. What happened was he did put the rifle in water, unloaded, no round chambered, unlike the H&K demos, then loaded and chambered it after dunking it and waited up to 30 seconds before firing it. By the time you'd fire the rifle, all the water would be out and less likely to have a malfunction anyway. Excalibur01

Are we going to add the QBZ-03? Same caliber, but it uses a conventional rifle layout based on the Type 81. I think it was in AO2:TFD.

@Excalibur01 There been alot of complains from the troops that the 95 rifle force them to use right handed even though some might be left handed. Also some complain with the awkard safety position lever.. however this rifle wont be phased out yet! After all it takes many years just to updates all the Chinese army division! The 03 rifle would probably be handed to elite division or special forces most likely. I hope some of these information helps.

Strange because from what i've read only right handed shooting is taught in East Asian Countries like China. Seeing as being a southpaw is discouraged from birth. --AdAstra2009 06:13, 3 May 2010 (UTC)

I must admit that as a Chinese, what AdAstra2009 saying is true. Both my mother and my sister were born left-handed, but the parents forced both to write with their right hands. Since my sister is an American-borne Chinese, she's still left handed in most aspects, but my mom seems to be completely right handed now. Left-handed people tend to be forced into "correcting" their dominate hands. This is simply a small part of the large amount of crap that China has that eventually convinced my parents to leave for the US.

When I was reading a Guns & Ammo article on the QBZ series, they showed a photo of a French soldier teaching Chinese how to shoot a bullpup left handed, but it wasn't correct since if he fired the rifle with his cheek against the stock, he'd get a shot of brass in his face. What he should have done was SBU, tilt the rifle so the shells eject down and away. I've heard about China discouraging left handers and some horrible stories about it, but for soldiers, you have to think about it. You need to know how to shoot with your weapon hand being left or right in the event your right arm is disable and you are forced to shoot with your left hand.

The British did a similiar thing with their main rifles. Regular army have the bullpup and Special Forces gets M4s and other traditional rifles Excalibur01

Most countries that adopted bullpups seem to regret it; soldiers hate them (and not only lefties). The advantages that everyone used to think made them so great seem pretty trivial nowadays. That's why SF units everywhere use AR while regulars use bullpups. Problem is, most of NATO doesn't have the cash (or isn't willing to spend the cash) to replace their bullpup service rifles, so they're stuck with those guns for the foreseeable future. Whereas the PLA has considerably more cash in comparison, so now is the time for them to make the switch. -MT2008 19:53, 3 May 2010 (UTC)

Yeah, China is actually smart about their military adopting the more tried and true look assault rifle. Excalibur01 21:58, 3 May 2010 (UTC)

I'd like to see some actual sources for this info. It seems the bullpup haters like to speak for everybody and make claims based more on rumors and personal opinion than anything else. I admittedly have no info about the QBZ-95, but then again, China isn't very forthcoming about it's small arms other than maybe exaggerated reports and statistics. You may now proceed to call me a CS/MW fanboy with no real knowledge of anything... Hughjefender

The main problems with a lot of Bullpup is adapting it for lefties, long trigger pulls and taking too long to reload compared to traditional rifles. Not saying there isn't a lot of advantages to a bullpup. The better ones like the AUG, and the Tavor can change the brass ejection for lefties and the F2000 has a forward ejection. Bullpups are more compact and just as easy to handle. Excalibur01 21:52, 15 February 2012 (CST)

The QBZ 95-1 is the solution the PLA has for lefties. It ejects to the 1 o-clock position to allow left handed fire. It also has the safety switch on the pistol grip and a bolt release right behind the magazine well. --Cifyra (talk) 21:35, 9 January 2013 (EST)

I agree. I also think that this page should be renamed since the Chinese QBZ is a designation and not a weapon series. It's a designation based on three words that describe the weapon's properties (almost all weapons adopted by the PLA is designated like this), 轻武器 步枪 自动 (Qing wu qi, bu qiang, zi dong) meaning "light weapon", "rifle" and "automatic". It would like be calling all the Russian weapons "6P weapon series" because they're all listed as "6Pxxx" in the GRAU index.

While I am thinking about moving the 03 to Type 81, I'm not exactly sure how to rename this page since the current page name is what's keeping the 03 on this page. Removing the 03 would also mean that the page title should be limited down to just the 95 family, but how should we call that? --Wuzh (talk) 21:36, 4 May 2018 (EDT)

We should definitely get rid of the Type 81 from this page, and in the event that we get to separate the QBU-88 sniper rifle and the QBB LMG for it, I guess we can simply call it Norinco QBZ-95 rifle series (or Norinco Type 95 rifle series, if that's what you meant by your previous comment) while keeping the carbine and export variants in it (I mean, the AK-47 page is named as such, even though it includes the AK-101, AK-103, etc.) --Ultimate94ninja (talk) 13:23, 29 May 2018 (EDT)

I say that the redirect of the so-called QB rifle series should be cut entirely. There is no such thing as the QB rifle series. (and there's also the extremely bizarre ambiguous redirect of QBZ-95/97) --Wuzh (talk) 01:48, 2 June 2018 (EDT)

About its depiction in Warface

Or in Chinese Passion Leads Army video game. Is this rail system completely fictional or is it based on something real? Lunar Watcher (talk) 18:40, 15 May 2018 (EDT)

Rails for the QBZ-95 are uncommon, but they do exist as custom upper receiver parts or even a plain and simple extra rail piece on the dovetail rails. Factory QBZ-95s all lack rails. As for the RIS in Warface, I think there might be some custom parts like that somewhere out there. --Wuzh (talk) 02:35, 2 June 2018 (EDT)