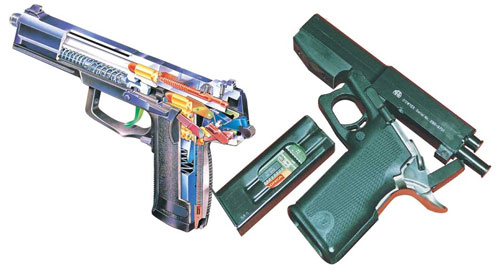 Comparison diagram of a rather poorly-rendered Heckler & Koch Mark 23 and a more recent Metal Storm VLE; note the "stack" reloads inserted into the rear of the VLE and the fire control computer and access-restricting technology in the "magazine." This VLE appears to use 9mm loads only. Considering how it uses the frame from an M1911-series pistol (complete with a now-functionless slide release) and how its fire control computer is rather clearly made out of an actual handgun magazine (resembling those used in certain 10mm M1911s), it is also most likely a non-firing mockup. 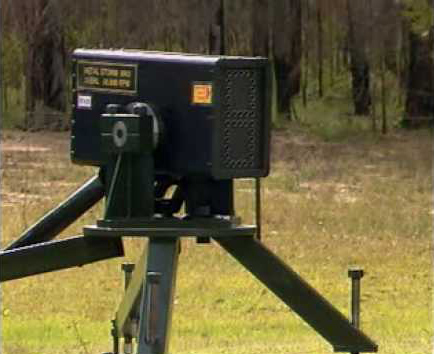 Metal Storm 36-barrel "Bertha" Rig - 9mm preloaded barrel. This is the million rpm demonstrator, though really each barrel only fired at ~27,777 rpm; each fired 5 bullets for a 180-shot million rpm burst from the entire rig. 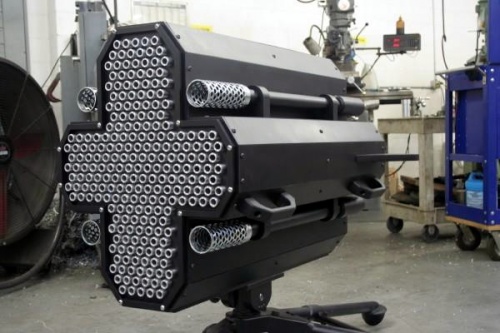 DX4 Vaporizer prop from CSI: Miami (Episode "Guerrillas in the Mist", S06E11). This image has been frequently misattributed as an actual Metal Storm weapon on the internet.

I don't think there's really enough entries for any given weapon to justify that. Just one page for the technology is a little nonstandard, but when these things have appeared in more than a handful of shows we'll take another look. Evil Tim 02:10, 25 July 2012 (CDT)

How does these weapons extract rounds from the barrel?

No matter how I think about it, I don't know how you could extract multiple rounds from multiple locations in a single barrel, could someone explain this? Z008MJ (talk) 10:42, 22 February 2016 (EST)

It depends really. For the most part, the spent casings essentially act as a sabot for the subsequent round in the tube. When the next round is set off, the casing is sent forward with the projectile and falls away when clear of the barrel. In a way, they operate very much like Roman candles, except there's not delay charge needing to be burned before igniting lift charges. However, there was some descriptions that made it sound like rocket ball ammunition, like in the Volcanic firearms. --Blitzen (talk) 04:12, 25 April 2016 (EDT)

There is no problem with the cases, as there are no cases. Inside the barrel it is simply an alternating stack of propellant and bullets. The way that they work is that the primer is built into the bullet itself, which is detonated when an electric current is passed through a conductor ring around the bullet. Originally there was literally only bullets and propellant in the barrel and the intention was that the force of firing would compress the next bullet and form a seal to stop chain-fires, however this didn't really work reliably so on newer versions there was a sort of O-ring seal around the head of the next bullet which on firing the bullet ahead was forced between the rear bullet and barrel. This seal says behind after firing, but its size and mass is negligible compared to the bullet so is easily pushed out of the way, as it is also no longer a tight fit after the firing pressure of the round ahead has dropped. I'm not convinced this is a great idea for military/police use as you have random debris flying out the front of you gun which is not necessarily going in the same direction as the bullet. It's kind of irrelevant though as there are a whole host of other problems with Metal Storm before you get to this one. --commando552 (talk) 13:34, 25 April 2016 (EDT)