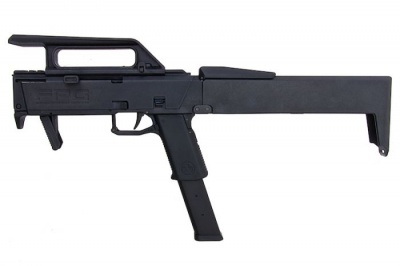 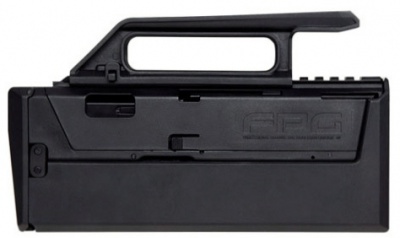 Are these actually made?

As one of these appears in the upcoming Ghost Rider: Spirit of Vengeance movie, I was wondering if these were actually being made as I thought it was purely a prototype/demonstration gun and hadn't gone into production. This also got me wondering, anyone know if it would be possible to fit a blank firing glock into the airsoft FMG-9? I imagine this would be a bad idea with a live firing gun, but blanks have mush less recoil so though the airsoft copy could be able to handle it. Am just trying to work out how this gun can be in something live action, but suppose it could just be the airsoft version with CG firing effects but will have to wait for the movie to come out to be sure. --commando552 05:49, 29 January 2012 (CST)

Given it's just a fancy box with a Glock 18 in it, you could probably mock one up pretty easily, especially if you make the gun that opens and the gun that fires seperate props. Evil Tim 09:24, 24 August 2012 (CDT)

I looked into it and found people who put real Glocks into the airsoft version with a bit of modification. Not sure how sturdy they would be with live rounds, but I imagine they should hold up fine with blanks. --commando552 09:51, 24 August 2012 (CDT)

I don't really see it as being much of a problem as long as you don't brace the stock against your shoulder; after all, if you're using the Glock's grip then all that might break the shell is vibration damage. Evil Tim 03:21, 25 August 2012 (CDT)

Well the one seen in the movie seems to be an Airsoft. They show close ups of the magazine and you get see it's an Airsoft magazine. It doesn't seem like a good idea for someone to try and modify an Airsoft to shoot live ammo. Sound like it'll blow up in your face. Excalibur01 19:28, 24 August 2012 (CDT)

I don't see how it's possible. You'd need to see if a real Glock slide can fit in the Airsoft copy and if the Airsoft copy can tolerate the shock of recoil from a real gun and not start cracking and fall apart. Also you'd need to find a way to attach the folding pistol grip and to adapt it to accept a real magazine. A gun is designed to tolerate the violent shock of the gun action. The Airsoft is really plastic, cheap plastic. I'd also want stupid people to avoid making it worse for the Airsoft community as it is. Anti guns have been encroaching on Airsoft as dangerous can tried to ban them since they are sour losers at the war on banning real guns. Excalibur01 17:07, 25 August 2012 (CDT)

The airsoft copy was made by KWA in co-operation with Magpul, and apparently, it's almost exactly the same as the real FMG-9, but with an airsoft Glock inside. So, Excalibur, it wouldn't be difficult to actually get the gun in at all, and I'm pretty sure it being almost exactly the same as the real one means that it could possibly withstand the shock of a real gun being used inside it, because it's not made of cheap plastic. Jeddostotle7 19:23, 25 August 2012 (CDT)

You kind of can, because in the real gun, as in the airsoft gun, it's a Glock put in a polymer shell with a new folding pistol grip, but there's still the issue of if the shell can withstand the shock of a real gun firing inside it, which it probably can. Jeddostotle7 21:54, 25 August 2012 (CDT)

The trigger mechanism wasn't designed for a real gun and it was never designed to accept a real Glock mag Excalibur01 23:46, 25 August 2012 (CDT)

Seeing as how the FMG-9 was never actually produced, I don't know where you would be getting the pistol grip from, and if you did have that part why not use the whole thing? The thing I found about someone converting an airsoft into a live gun was on a forum which I annoyingly can't find now (it was about 8 months ago when I first asked the question) and I seem to remember that the only big modification that was necessary was to the pistol grip and trigger, but don't know whether it was to the existing trigger to make it work with a real slide, or so that a real Glock trigger group could be dropped in. Even if you were able to get it to work I would never trust it to fire live ammo, but think it would be fine firing blanks. --commando552 03:42, 26 August 2012 (CDT)

"I don't see how it's possible. You'd need to see if a real Glock slide can fit in the Airsoft copy and if the Airsoft copy can tolerate the shock of recoil from a real gun and not start cracking and fall apart."

Well, if you're using blanks it's not going to be that much shock; I doubt it would last forever, but as long as you used the Glock's grip rather than the Airsoft shell's stock or grips the worst it would take is vibration damage. If that was a factor you could probably get away with using a resin cast of the airsoft shell on the firing prop instead of the original, I suppose.

"Also you'd need to find a way to attach the folding pistol grip and to adapt it to accept a real magazine."

Actually no, like I said above the best way to do it in a movie would be to have a non-firing prop that folded and a non-folding prop that fired. That way all you'd need to do would be knock up a new trigger guard for the firing prop that looked like it folded. Evil Tim 15:28, 26 August 2012 (CDT)