On the DVD case/ movie poster, Bruce Willis/ Goodkat is holding a Springfield XD in the 4" Service model, probably in .45 ACP or .45 GAP. The loaded chamber indicates the pistol is not chambered. 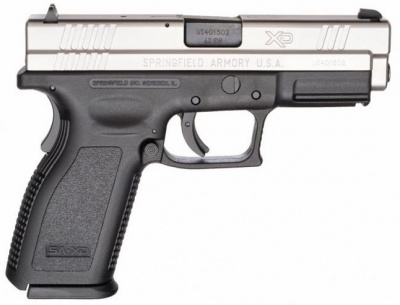 What's Bruce Willis holding in the movie poster? Is a two-tone springfield xd?

There was an alternate version of the films poster in which Bruce Willis points what is clearly an XD at the viewer. -Anonymous

My bad, you mean this one --> http://thumbs.filmstarts.de/wallpaper/LuckyNumberSlevin-DVD.jpg I own an XD, and they have an indicator on top the slide that pops up when the chamber is loaded. The one in the poster is unloaded. --redram355 14:55, 30 March 2010 (UTC)

I haven't been to this page in a while but the screen caps seem lighter and more fadded looking than I remember. Have they been replaced recently? -Anonymous

Personally, I think it was better before. -Anonymous

There are some guns missing from one of the deleted scenes where Elvis and Slow? try to search Mr. Goodkat for weapons--FirearmFanatic 15:30, 12 July 2010 (UTC)

Is it me, or is one of the silencers on the CZ-75 pointing at a slight downward angle? -J3