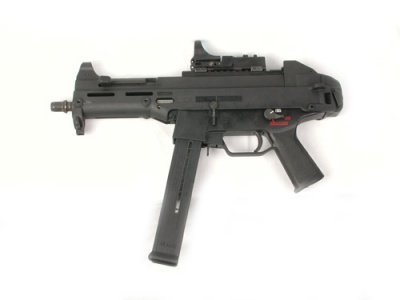 Heckler & Koch UMP45 with the stock removed and fitted with a C-More red dot sight - .45 ACP as used in the film Terminator 3: Rise of the Machines. 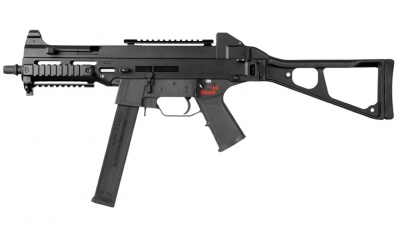 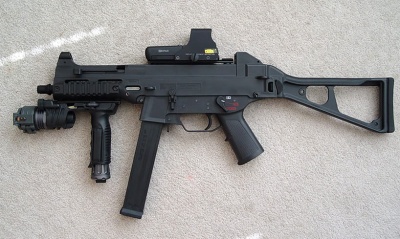 Don't know why, but all the magazines I have access to don't have any 'window' in them. Replacement mags have them, so I will try to get some new mags for the guns and rephotograph them with the newer magazines. MoviePropMaster2008 03:20, 7 January 2009 (UTC)

Why doesn't the UMP have more military usage?

I've never heard of any significant flaws, yet this apparently lightweight, accessory rail-fitted, and more ammunition diverse submachine gun seems to have be mainly present in movies and video games rather than actual military use. It is meant to be a successor to the MP5, so why did it not get the same global usage, despite the MP5's immense popularity?

I think part of it is that it wasn't so much the successor to the MP5, but rather a lower cost alternative. The MP5 is already very established, and as H&K still make it along with replacement parts and accessories, there is not much incentive for a military force to switch from a proven weapon system to a new one. The MP5 is also arguably a better weapon, as the delayed blowback action combined with a slightly longer barrel means it has a greater muzzle velocity along with being more accurate. Furthermore, the MP5 also feels better built and has a nicer feel to it (in my opinion). Most militaries will only use a 9x19mm SMG so as to give it better ammo commonality with side-arms along with other countries. The UMP has a slower cyclic rate than the MP5 due to the fact that it was primarily designed to fire higher power ammunition, so if you are using a 9x19mm model the rate of fire is perhaps slower than necessary. There isn't really that much of a practical difference between the two weapons performance, I think it is just down to the fact that the MP5 has a good reputation and is a well proven weapon. I would say though that I think the UMP is more suited to law enforcement rather than military usage, due to its lower cost, simplicity and ability to fire larger caliber ammunition which is favoured by some law enforcement groups. --commando552 (talk) 12:23, 28 January 2013 (EST)

I think it's also the substantial die-off in the market for subguns, especially after the North Hollywood shootout in '97 showed that even SWAT might end up facing bad guys with body armour. Most customers who still wanted 9mm subguns kept their MP5s, the rest tossed them and went for carbine rifles or P90s. Plus I recall the HKsucks guy said a local PD returned all theirs because the stocks break easily. Evil Tim (talk) 12:56, 28 January 2013 (EST)

it was created as a budget alternative to the mp5 ie the cost of one mp5 would be the same as 2 UMPs plus try to find a military special forces on this planet that does not use the mp5 h&k made a weapon for law enforcement they saw a gap in the market and went for it also if you want to deal with some with body armour mp7 bullet is designed from the get go to make a laugh of nato body armour --Seekerdude (talk) 19:44, 28 January 2013 (EST)

Why is it that multiple video games depict the UMP's charging handle as locking back on its own when the magazine is emptied? Is it merely for gameplay purposes or something? At that rate, some developers are apparently thinking that this is how the real weapon functions, even though it clearly doesn't (at least based on what I've watched on YouTube). --Ultimate94ninja (talk) 04:54, 11 May 2018 (EDT)