This page used to have captures from the movie. What happened to them?

We lost every edit that had been made after December 21st of last year. I am the person who uploaded all of the screen captures from the movie (using my extremely crappy-quality Mandarin DVD, unfortunately). Of course, I do have them on my hard drive still and I have been meaning to edit this page and re-do all the work I had done previously. I've just been extremely busy and haven't had the time or patience to sit down and get it done (please remember I had almost 30 guns and several screencaps for each). But I will do so as soon as my schedule gets a little less hectic.

Nice job, man, seriously...nobody else on here has the same "can-do" attitude you do. That should be your slogan or something..."no job too big, no film with too many guns!"

We should probably use the discussion page now to figure out the guns. I still don't know about the .38 revolvers...Taurus M85 seems likely, but I'm not positive. Also, I'm still not sure about that mystery semi-auto pistol in the arsenal. A Walther P88 is possible, but it also has characteristics of the JAWS Viper and Star Megastar.

BTW, it's funny to me that all of these foreign action films made in countries with gun laws far stricter than the U.S. have a weapons variety that puts any American action movie to shame. IMDB says that there were 200 guns used in this film, mostly real ones, and that they fired 100,000 blanks during production.

I just saw the whole movie, so I thought I'd take up a pole.

Who thinks this is the best (or atleast one of the best) action films ever made?

Actually, I'm starting to think it's probably an original Armsel Striker and not an American-made Street Sweeper. The barrel is the biggest clue (the Street Sweeper had an 18" barrel so it would be legal to sell in the U.S., which is visibly much longer). Also, the picture below supposedly illustrating a Street Sweeper actually shows the Protecta, which is an improved version of the Striker that didn't have the winder on the drum.

Actually the street sweeper was available with a short barrel (and registered as a short Shotgun) within the U.S. Only the 18" barreled version was commercially available in regular gun stores to the general public, that is until the Clinton Ban. But being that this movie is a Hong Kong Movie, they would have the Armsel. Why import a U.S. Clone of an existing weapon that's sold internationally?MoviePropMaster2008 08:25, 6 January 2009 (UTC)

Why none of John Woo's American movies ended with the hero murdered by the villian and then the villian is killed by his friend like in A Better Tomorrow and The Killer?

most Chinese movies I seen have sad endings. but I did like the ending of hard boiled because you don't know if he is sailing away to a new life or sailing away to the afterlife. but eather way it is kind of the same thing

Why is Allen called Allen, in the movie his name is Tony?

In my copy, he was called Alan. Different dub, possibly? -SasquatchJim.

I have the subtitled version which is usually more accurate and I think he is called Alan in mine. Also I would like to throw in my opinion on the whole happy/sad ending thing. The reason Woo's U.S films don't have sad ending is because Hollywood favours the happy ending more. This is usually down to "preview audiences". It's rather frustrating when they tack on a happy ending to a film that has a very sad tone and should have a sad ending to match the overall tone of the story. Or they change source material to be more uplifting, like Man On Fire. The book is a lot different in it's ending than the two films. There are a few people who can get away with the sad ending but they usually have to fight hard for them. William Friedkin apparently had to fight a lot for the ending of To Live and Die In LA. He was forced to film a more uplifting ending but they thankfully went with the original ending. Army Of Darkness is a brilliant example of thhe happy/sad ending thing because the S-Mart ending was done to have a more heroic ending but the Apocalypse ending matches with not only the tone of that film but the tone of the other one and it sets the scene for what would be a kick ass fourth film if they ever get around to making it. --cool-breeze 01:52, 26 February 2011 (UTC)

Agreed. IMO, it's more acceptable when working with a movie that either doesn't have source material or isn't supposed to stand up to close scrutiny. I.E. Army of Darkness. The movie already has enough fridge logic and silliness, so I think it's forgivable. Also, I believe they did try to make a fourth one, but fan reaction was less than promising. However, with something like Hannibal or First Blood, it can leave a bad taste with those who've read the SM. -SJ

That's the opposite in regards to the Evil Dead films. The fans want a fourth one Sam Raimi has been too busy to do one but has said that he is looking into a fourth one. There's been rumours of it for a long time and hungry fans for a fourth film. I hope they make one. --cool-breeze 19:03, 26 February 2011 (UTC)

"Mad Dog loads a .30-06 round into a Thompson Center Contender" sounds cool, but not possible. The Contender was never strong enough for the '06, which is why TC eventually expanded their product line with the stronger Encore model. Also, if you look at the chamber are of that open Contender, you can see that it is relieved a bit for a *rimmed* cartridge. In the Contenders, it was common to shoot wildcat cartridges based on a 30-30 Winchester or some other rimmed case (the JDJ family of rimmed cartridges were developed exclusively for the Contender, which is most likely what is being loaded in the picture).

Though not clear in the screenshots shown, or on detailed view of nearby frames, the cartridge is probably 7-30 Waters, or possibly .375 JDJ.

You're right, my mistake. I was thinking of the remake they'd considered doing a while back; not a sequel. My bad. -SJ. 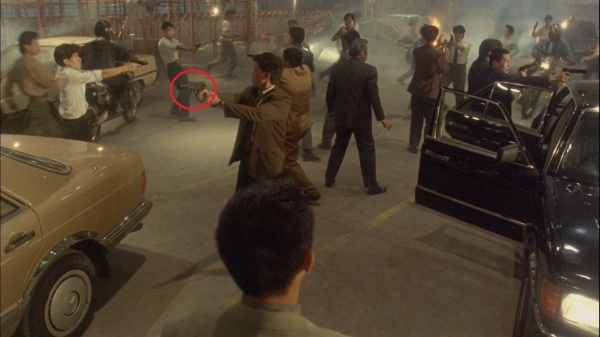 Looks like a target version of Jennings/Bryco/Jimenez... Charly Driver