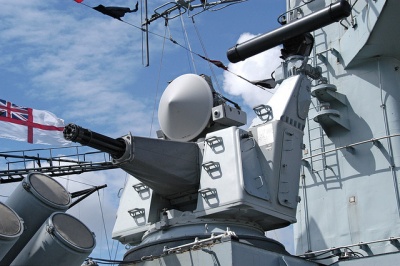 GAU-8/A mounted in a Goalkeeper CIWS aboard the HMS Campbeltown, a Royal Navy Type 22 Frigate - 30x173mm 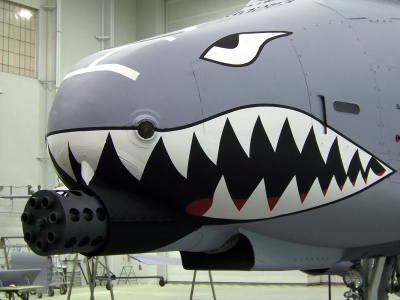 Yes, the pounds of force exerted by the GAU-8 is actually slightly larger than the thrust force of the A-10 engine. That is why the gun had to be off centered so the GAU-8 would not affect the flight of the A-10.

I think that when the gun is fired it automatically kicks the engines to full to try and counteract this effect. It doesn't really slow the aircraft down much though, as it is generally in a dive to some degree when firing and it is a relatively short burst. A bigger issue in the fact that the smoke from the gun has no oxygen in it so it initially caused the engines to flameout during testing, so they had to modify them with a igniters in the combustion chamber of the turbines that kick in whenever the gun is fired in order to keep them going. --commando552 (talk) 13:10, 14 November 2013 (EST)