Since energy guns were in the main page but don't qualify to remain due to IMFDB policy, they've been moved here.

The alien blaster is a special weapon in that it has the highest damage-per-action-point of all single-shot weapons in game, as well as the second-highest ammunition capacity of all single-shot weapons. It is also highly accurate. Offsetting these strengths is its extremely short range of 10 hexes, the shortest of all ranged weapons. The alien blaster can be found in the "Alien Ship" special encounter. Despite it seemingly being alien technology, it is powered by man-made small energy cells (the game's ammo for small energy arms). Though, according to the game description, it apparently supports this ammo type somehow. 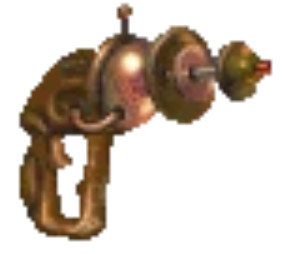 The "Wattz 1000" is the given name to laser pistols in-game. Its low damage is explained due to it apparently being a civilian model, that possesses an inferior wattage to military and police versions. This weapon can be found on the fifth floor of the West Tek Research Facility or pickpocketed from Paul in the Lost Hills bunker and General Maxson in the Lost Hills bunker. 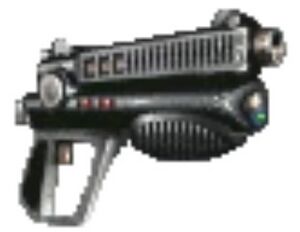 The "Glock 86" is the only plasma-handgun-role weapon in the game and is more powerful than the laser pistol. It shoots a small bolt of superheated plasma and as with all other energy handguns, it is powered by small energy cells. According in established lore, Gaston Glock (the founder of the Glock weapons manufacturing company) seemingly transferred his consciousness into an artifical intelligence prior to the Great War and continued developing weapons, including the ficticious Glock 86. 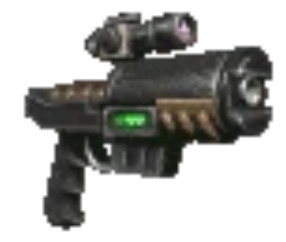 The "Wattz 2000" refers to the game's laser rifle which visually reuses sections of the "DKS-501" rifle. In-game, the laser rifle is powered by microfusion cells (the ammunition utilized by non-handgun energy weapons), has a long range and accuracy which improves its effectiveness at longer distances. This weapon is carried by some Super Mutants patrolling the Mariposa Military Base.

The DKS-501's icon for comparison.

The "H&K L30 Gatling Laser" is essentially the energy weapons equivalent of the CZ53 minigun in that it is a heavy, fast-firing multi-shot weapon. It also reuses parts of the CZ53 minigun's icon. According to lore, Heckler & Koch designed this weapon specifically for military use, and was a prototype at the time of the Great War. In-game, the L30 Gatling Laser is used by Brotherhood of Steel Paladins and Unity Nightkin.

The CZ53's icon for comparison.

The "Winchester P94" describes the "plasma rifle" weapon role for Fallout. Implied by the name, it was supposedly manufactured by Winchester. The weapon is described as an industrial-grade energy caster that forms plasma bolts in a chamber which are discharged through a superconducting barrel with electromagnetic claws that stabilizes the projectile.

The Turbo plasma rifle is a modified version of Winchester P94. From what the in-game description states, this version of the P94 has the plasma bolt chamber hot-wired in order to speed the bolt formation process, resulting in an increase in rate of fire.

How do you edit Titles? I'm trying to fix the missing period in the F.E.A.R. title.

Some of the weapon desciptions are directly ripped from The Vault (Fallout Wiki). Did the author get permission to rip info? Hell, even the energy weapons, which are not supposed to be here, since they don't relate to any real-world firearm.

If the author cannot provide original information about the firearms in this game, this page should be deleted, like the Fallout 2 page, in my opinion. --Xarex 10:12, 26 February 2011 (UTC)