In the episode "What hides beneath" when Hal is in the Armory loading up, you can see him put a Colt New Service in his shoulder holster. You can tell by the placement of the little medallion on the grip.

After watching Episode 6, I'm looking to see if someone can pull screenshots from when Maggie gives Moonblood's character the 92fs Inox, and when Weaver kills the skitter with a Mossberg 590a1 Special Purpose 8-shot with ghost ring sites. Please upload and I will add to the page. Thanks --Gwhysow 17:28, 18 July 2011 (CDT)

The tape effectively turns the back of the stock into more of a oval butt plate rather than a hollow U shape. Unfortunately, this would also mean that it would be impossible to unfold/fold the stock with the magazine in place. --commando552 11:45, 24 June 2011 (CDT)

The original Type 56 was a milled receiver gun and was essentially an AK-47 with the folding bayonet added. When the AKM was introduced, the Chinese updated the Type 56 with the AKM stamped receiver but kept the typical AK-47 furniture, top cover, gas tube and (hooded) front sight. The main "functional" part of a later model Type 56 (the stamped receiver) is from the AKM, so that is what I would say it is based on. --commando552 17:21, 11 April 2012 (CDT)

Just watching it now and that was the first time I've seen someone get corrected on calling a magazine a clip in a film or TV programme ever. Nice little touch. So far this series has a lot of promise. --cool-breeze 18:29, 23 June 2011 (CDT)

I caught a re-run of the premier episode and after getting a good look at it, I'm pretty sure that Maggie's 1911 is a Colt Gold Cup National match judging by the sights and slide serrations. ShootingLiberal 02:14, 29 June 2011 (CDT)

That's what I thought at first, but then noted the Classic Bo-Mar sights. Used to own at NM that had the Colt slant-adjustables. Made the edit, and corrected Mason. Good catch on the Colt, ShootingLibera! --Gwhysow 15:34, 9 July 2011 (CDT)

Alien invasion basically throws the rules out the window I guess but why are Kalashnikov rifles, firing in full auto mind you, more abundant than AR-15 pattern rifles/carbines and other more common sporting and military surplus firearms? It's Boston; Colt and S&W are right down the road...

AKs are more rebellious, I guess. Evil Tim 11:36, 8 July 2011 (CDT)
I guess. Wolverines. They were more prominent in the pilot so it could have been a budget thing.

The screencaps don't illustrate my point too well but you're right, besides the main guy and one or two others it hasn't been fired all that much on screen though plenty of background guys pulling security duty have AKs. It seems to me that the main and secondary characters got the pick of the litter and the rest got whatever they had left available...

I could just be nitpicking again, it's a great show so far

Just wondering if anyone's working on categorizing what the harnessed kids were shooting.

Thought I saw an MP5 Tactical and a couple other "common" SMGs and assault rifles.

I don't consider this a spoiler by this point, so why not go ahead and post 'em?

I saw a AK gun with drum magazine.

I think it should be pointed out in the article that Tom switches to the AKM after losing his Type 56 in an early episode.

i just watched the final episode again and discovered there was a shotgun and what look liked a ruger mini 14 in a female warrior's hands.

I have discovered that in the episode eight hours for a few seconds i noticed a few more guns. I believe there were two FN Fal with pictanny sights and with Knights Armament Company RAS and also behind the guy who tried to shoot Matt one of the fighters might be equipped with what looks like a Springfield 1903. Balin21 11:08, 23 May 2012 (UTC) 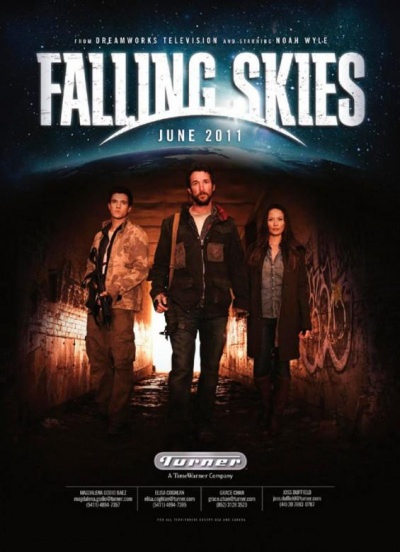