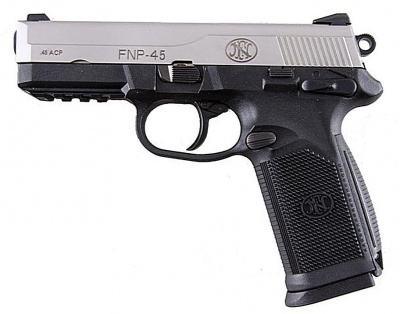 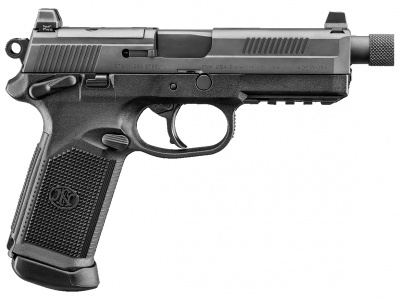 Not really, they have different slides, sights, grip designs, magazine releases, rails and safety mechanisms (the top has a manual safety whereas the bottom is a de-cocker only without an ambi slide release). Looking into it, the bottom gun is the original FNP which was in 9mm and .40. They then came out with the FNP-45 which has all of the differences listed above and looks like the one on the main page (I think this was actually built for a potential military/LE contract or something but not sure). FNH USA have now come out with an updated versions of the FNP and they call them the FNX-9 and FNX-40 which have all of the FNP-45 improvements. There is also an FNX-45 which looks pretty much identical to the FNP-45 but has a few tweaks that makes it more tolerant of ammunition as the original was designed around NATO ammo specs. To add a bit of confusion, the Belgian company sell the FNX as an updated version of the FNP and sell it as such. I think these later guns should be referred to as the FNX so as to distinguish them from the FNP, but still list them on this page. --commando552 15:11, 23 July 2012 (CDT)

It's full name is the FN FNP. Pleas change the title, becasue I have no idea how do.

I don't doubt that, but almost all of the guns here, especially the non-military ones, are listed as <Company> <Model> like Kimber Warrior or Browning Hi-Power. "FNP" is just the model, is it not? --Funkychinaman 15:54, 23 July 2012 (CDT)

While that is true, both the guns you mentioned are actually called that. If you look up the Browning Hi-Power in the Gun Digest Book of Modern Gun Values it is listed as the "Browning Hi-Power" not the "Hi-Power". The Kimber Warrior isn't viewable in that preview but all of their pistols are called "Kimber _____". It is however worth noting that the gun has apparently been re-branded as the FNX which may also explain what commando552 was pointing out above. You can read about it HERE. You can also see on FN's website that they market it as the FNX and FNS. --Zackmann08 17:24, 23 July 2012 (CDT)

To be fair, FN isn't going to insert the company name on its own website. (For example, the Browning Hi-Power is simply listed as "Hi-Power" on Browning's website.) If you go to a neutral website (like this one or this one), the company name is listed. And if we're just going by that book, then is "FNP" the company name and 45 the model, like with Glocks? --Funkychinaman 18:06, 23 July 2012 (CDT)

This is explained above. Basically, the original gun was the FNP which was this: 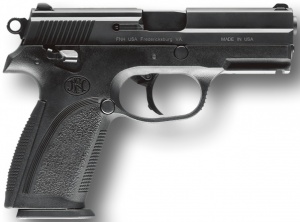 FNP-9 Pistol - 9x19mm
Next they introduced a .45 caliber pistol which was originally made to compete for a military contract whichfeatured a number of ergonomic improvements, and a frame mounted safety rather than decocker. They then came out with an improved version of the 9mm and .40 pistols known as the FNX that incorporated the FNP-45 changes. Finally, they then replaced the FNP-45 with the FNX-45 which is basically identical, but has a few slight tweaks in the dimensions to make it more tolerant of a wider range of ammunition (as it was designed for a military contract it was only designed to work with one type of ammunition). To add to the confusion, it is only FNH USA that uses the FNX desingation, whereas the Belgian FN Herstal just refers to it as a updated version of the FNP. However, to distinguish the variants we refer to them as FNXs. --commando552 (talk) 18:00, 6 October 2013 (EDT)

There was some sort reason, which is that in the US the FNX replaced the FNP. In Europe they made the same changes but kept calling them the FNP, but we go with the convention of using US designations when there is a difference. There is a difference between the FNP-45 and the FNX-45 but it is very slight and difficult to tell, so the FNP/FNX titles are probably the best way to go. --commando552 (talk) 08:33, 11 February 2018 (EST)