I think your anti-tank rifle is a PTRD-41, it's just drawn off-model with a magazine except in the second to last shot. It's not the only way it's off-model, the bipod keeps moving around on it too. Evil Tim 19:29, 19 October 2011 (CDT)

It's somewhat similar, but not close enough for me to feel comfortable saying that is. The magazine, muzzlebreak, bipod assembly, and carry handle are too different.--PistolJunkie 20:57, 19 October 2011 (CDT)

Actually the muzzle brake is about the same as on the real one (see here), you just can't see the shape in our side-on view. The bipod and carry handle are mostly just slung anywhere the in-between animators could fit them, but they're in the right place here: 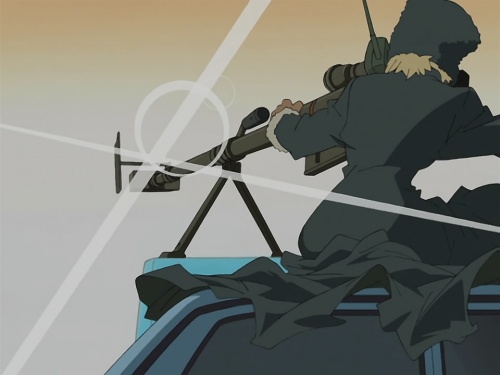 Bipod placement is correct, carry handle too. Barrel seems a bit short here, and I really don't think they knew what the front sight actually was so it turns into this huge, weird fin.

As well as the front sight being weird, the rear one is always missing as far as I can tell. In this shot it's basically correct aside from bipod placement and missing carry handle, they haven't even added a magazine to it: 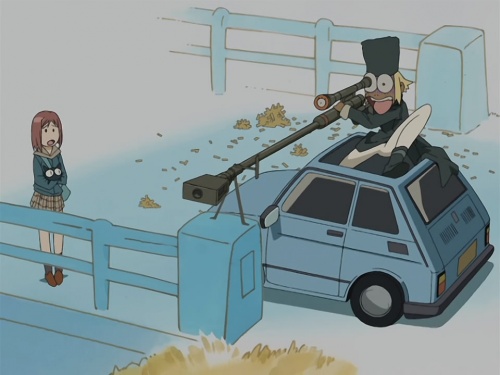 This is the best shot of it being a PTRD.

The manga version of the "ukulele no good" scene features the insane Haruahara revealing that the ukulele she carries around actually conceals a cut-down rifle action (not that it does much against a demon). I was really hoping this happens in the series as well, but really, her futilely cranking a monster over the crown with a ukulele is just as good. Atypicaloracle (talk) 17:36, 17 July 2013 (EDT)