Talk:Elite Squad: The Enemy Within

The PT92 is probably a PT100. The 9mmP is not commonly used by the police in Brazil, but the PT100 chambered in 40 S&W is one of the most used guns by police in the country.

I have a question on these two photos if these are just publicity stills or not. I've seen the Blu-Ray version, but these scenes aren't present though I may have missed them. If anyone can get back to me, thanks. Ominae 01:17, 4 March 2012 (CST)

This two photos are not publicity stills - they are from a scene where the militia robs a Civil Police station of its weapons. The scene may have been cut depending on which regional version you were watching --Markit 09:44, 4 March 2012 (CST)

Thanks. I've viewed the original Brazilian version and I saw the scene already, so I may have missed it. Thanks. Ominae 14:52, 4 March 2012 (CST) 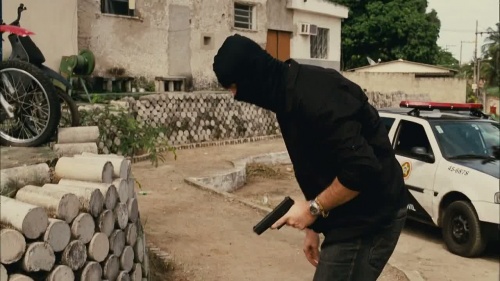 A gunman approaches the Civil Police station with a Glock 17. 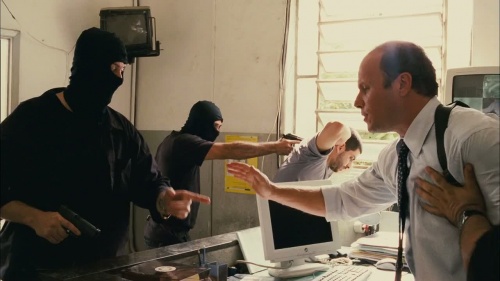 The gunman orders the police chief to hand over the keys to the weapons locker. 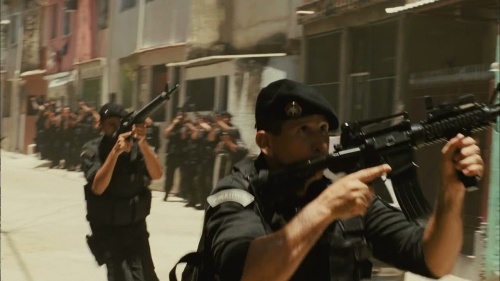 BOPE officers with M4s advance during a raid. Note that the red dot is mounted backwards. The sights are mounted as though they were EOTec holosights. Also, it is doubtful that the sight would be usable in its current position, as the carry handle blocks the view.

It won't work because it's mounted backwards (meaning the red dot would be invisible to the shooter and visible to the targets). Being on the handguard means nothing since a serious shooter with such a configuration would co-witness his red dot with his irons. I've seen this set up used by FAST Company Marines in pics. It's an adequate alternative if the carry handle is your only BUIS option and you don't want to forgo that fallback, but not ideal if you have other options. Spartan198 18:26, 27 August 2012 (CDT)