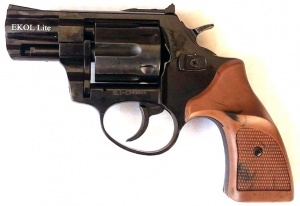 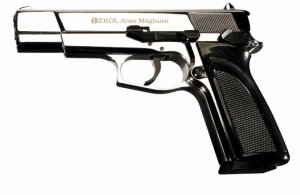 Firstly, the Grizzly and the Tuna are both pretty much straight copies of the Beretta Cheetah and FIE Titan respectively, so shouldn't they be listed as variants on those pages as is the case with other blank fire replicas? Secondly, is there any particular reason this page was split off from the blank fire only one? It seems a bit arbitrary to me and makes the guns harder to find. Also it was decided a while ago that we didn't want multiple pages for blank fire guns that are not based on anything, but instead to put them all on one page. --commando552 (talk) 06:51, 20 March 2013 (EDT)

But like I said two of them belong on the pages for the weapon they are a replica of, so there are only two which appear in anything meaning it is less than Zoraki, and equal to Blow, Bruni and NEF and they don't have their own pages. I made the blank fire only page a while ago because multiple Zoraki models were showing up in stuff (up to that point the only blank fire gun that actually had its own page was the Zoraki 925 I think and possibly the Bruni) and MPM2008 told me that it would be best to have all the blank fire guns on one page and I agreed, so if you want to split them up again I would check with him first. I see no problem with their being an Ekol manufacturer page though, and this goes for other blank fire only manufacturers like Zorako. --commando552 (talk) 07:19, 20 March 2013 (EDT)