I thought the SCAR was more like the G36c but i guess not.

The grip of the Bauer SOCOM is the grip of a Walther P99, isn't it?

Shouldn't we add the images of the weapons from the Crysis Wiki? They give a better view of the weapons than just the screen-shots alone on the page.

Sounds good, unfortunately I don't have the game, sorry.

The Eotech 551 (distinguishable from the 511 model due to the presence of a night vision mode button on the control panel of the 551) appears as the "Reflex Sight". However, the two knobs found on the right sight of the real sight are incorrectly depicted on the left side in game. It's also depicted without a protective shroud like the earlier Bushnell holosights.

- The G3 actually has a pretty big following in Africa, especially old CETMEs.

-The assault rifle in Crysis 2 looks far more like a Bushmaster ACR than a G3. 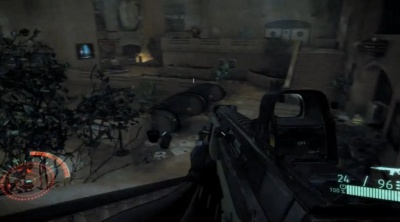 The new assault rifle in Crysis 2.

Someone needs to start a W.I.P. Crysis 2 page.

Does anyone know What the caliber of the SCAR in this game is, in the first one I remember it being 6.8x45mm. - Mr. Wolf

It actually looks a lot like an XM8 with the front end of this thing.

Also, regarding the DSG-1: picture it as a Pimp My Gun kind of thing, it's as if someone tried to make a PSG-1 out of the parts of a DSR-1. It's got the long, solid handguard with the barrel projecting forward of it (though it has a strange almost shotgun-esque grip below the main part of the handguard, which seems based on the lower part of the DSR-1's grip), the same magazine placement, a very similar stock, and, of course, the name is a dead giveaway of what they were going for with it. I know Frankenguns can be a little hard to place, but as with the SL-8 / GK-8, they tend to announce what they're trying for in Crysis. Vangelis 05:08, 27 February 2011 (UTC)

The Anti-Aircraft Tank bears a certain resemblance to the Russian 9K22 Tunguska, don't you think?