Action-wise, it hasn't been bad, but the writing is atrocious. My favorite line so far is "the armor is thick enough to survive anything from a Stinger to a ten-foot SAM." Does the tank fly too? I don't know, I'm only half way through. --Funkychinaman 10:15, 20 April 2012 (CDT)

Sadly no. The tank is just a funky looking tank with lot's of guns on it. But here is a historic fact for you. Durring the Yon Kippur war Israeli tankers encountered Egyptian SAM Sites. According to the Israeli tankeres the SAM operatiors tried to use their sams as anti tank weapons. there were missiles the size of telephone poles hitting tanks...and doing only cosmetic damage to the hull. Rockwolf66 11:48, 20 April 2012 (CDT)

Well, it's because a SAM is basically a hollow tube made of tinfoil. Collision mechanics says almost all the energy of the collision would go into the missile destroying itself rather than doing work on the tank's armour. It's much like if you punch a wall as hard as you can you'll break every bone in your hand and do absolutely nothing to the wall. Evil Tim 11:56, 20 April 2012 (CDT)

Watching the whole film did not make it any more comprehensible. Did they ever explain WHY the US would allow the Mexicans/Libyans/Soviets to steal the tank? Did I miss it? --Funkychinaman 09:10, 23 April 2012 (CDT) 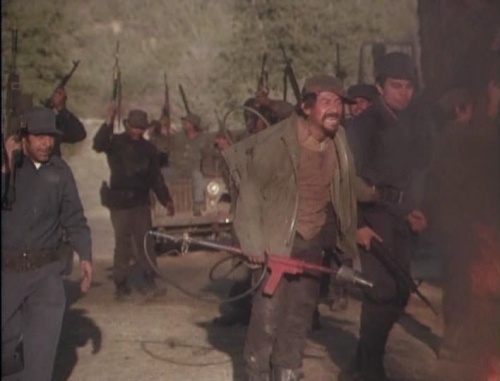 I don't know if that definitely shows a relationship, there couldn't have been that many faux Soviet armored vehicles available during the 80's. It does look a little off though. Are ANY of the RPGs in movies real though? Where would someone go to buy a rocket launcher? --Funkychinaman 23:28, 23 April 2012 (CDT)

Well one of my local Gunshops has a fired off Stinger Missile launcher. With a bit of paint and some mocked up parts added it would look 100% funtional. In the mid 1970's some guy sold a Redeye launcher to a film armoryRockwolf66 01:33, 24 April 2012 (CDT)

"The same aircraft was used in Braddock: Missing In Action 3 and, with slightly more convincing modifications, Red Scorpion."

The helicopters used in this film and MIA3 are exactly the same, right down to the fake armaments they carry and the paint scheme applied to them, so I would guess they are the same aircraft. The fact that models were clearly used to depict their destruction in both films also makes it seem likely that the chopper was indeed used again in Red Scorpion. But to be honest when I added that note to the page I didn't mean to specifically imply it was the very same aircraft used in all three, so you're rewording is probably better, at least until we know for sure.--Leigh Burne 02:44, 2 May 2012 (CDT)