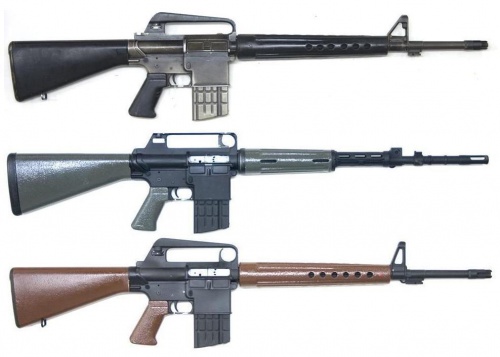 Various AR-10 models. The bottom rifle is a "Sudanese" model. The middle is a sniper variant of the "Portuguese" model with the front sight removed and a scope mount integrated into the carry handle. The top rifle is a mystery, as it appears similar to a "Sudanese" but features a front sight block taken from an AR-15 variant, the top mounted charging handle is absent and there appears to be a rear mounted cocking handle as seen on the AR-15. It is possibly a "Sudanese" rebuilt with some later model parts.

The annoying thing is, I actually knew that... Just forgot that rule. I saw a bunch of blank entries and figured I'd move um to the discussion page. Thanx for correcting me. --Zackmann08 13:11, 16 March 2012 (CDT)

No problem. Sorry if I sounded rude. I am having some private life problems right now, which were (likely) affecting my edit(s). Sorry again. --bozitojugg3rn4ut 17:52, 16 March 2012 (CDT)