American Gods is a television mini-series airing on Starz channel, based on Neil Gaiman's novel of the same name. After being released from prison, Shadow Moon finds that his wife is dead and the life he thought was waiting for him in ruins. He is recruited as an assistant and bodyguard by the mysterious Mr. Wednesday, who he later learns is the Norse god Odin, brought to America along with many other "Old World" gods by the earliest settlers and immigrants. In danger of being forgotten, Wednesday wishes to recruit an army of the "old" gods to rebel against the modern world's new objects of worship, including technology and mass media, whose avatars try to prevent Shadow from joining.

The following weapons were used in the television series American Gods:

Jack (Beth Grant) the proprietor of Jack's Crocodile Bar, threatens Mad Sweeney (Pablo Schreiber) with an Ithaca 37 as a warning to leave, in "Head Full of Snow" (S01E03).

In "A Murder of Gods" (S01E06), Vulcan (Corbin Bernsen), the Roman god of fire and blacksmithing, is the patriarch of a small Virginia town, known as the founder of the bullet mill that drives its economy. He explains that by "franchising" the source of his worship, he kept his power alive. Among his extensive firearms collection is a Webley .455 Mk VI revolver that he casually fires at a stuffed deer head in his home. 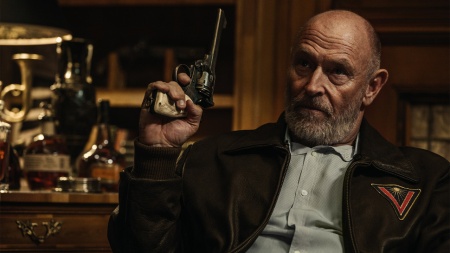 "You saw what I was. I was a story people forgot to remember to tell. And they gave me a gun. They put power back in my hands and I gotta tell ya, it feels good."
Vulcan (Corbin Bernsen) shows off his ivory-handled Webley .455 Mk VI, filled with rounds stamped with his name.

In "The Secret of Spoons" (S01E02), over dinner in his Chicago apartment, Czernobog (Peter Stormare), the Slavic god of darkness, confides to Shadow and Wednesday that he was once employed as a "knocker" in a slaughterhouse, killing cattle with a sledgehammer, a job that required both strength and skill. He complains that, with the introduction of the captive bolt pistol, which is simply placed against the animal's skull and triggered, "now every monkey with a thumb can kill."