The two guns in the film do not appear to be 45-mm 21-KM naval AA guns. The first with a long barrel has the recuperator cylinder below the barrel, while the 45-mm 21-KM naval gun has cylinders above and below the barrel. The second with a short barrel has the recuperator cylinder above the barrel, hence does not appear to be a short-barrel version of the first gun. There are other differences. LJ (talk) 16:31, 29 December 2021 (EST)

The first gun seems to be a Hotchkiss, I'm not sure but maybe a 57 mm. The second one seems to be a 76 mm, the position of recoil cylinder over the barrel is common for a number of British guns, but I cannot identify the model just now, need to look some books. As this scene depicts the actual museum in Cartagena, maybe we can find these guns on the cite of the museum. --Greg-Z (talk) 03:54, 30 December 2021 (EST) 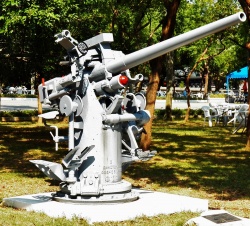 The second gun resembles the British 13 pounder 9 cwt anti-aircraft gun, but I haven't found a good image that matches up. Evidently there were numerous mounts for this gun. LJ (talk) 16:42, 31 December 2021 (EST)