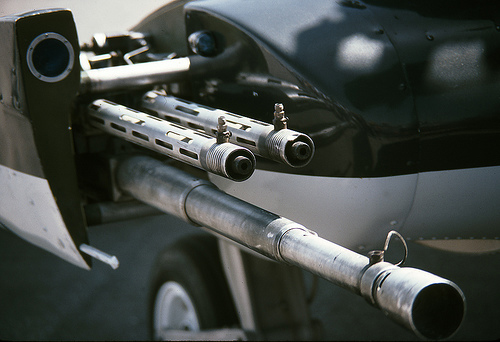 Closeup of the Guns mounted on Airwolf. The big cannon underneath was supposed to be a 40mm cannon, while the two above were 50 caliber.

From the look of it these are gas-burning fakes, there's piping visible behind the bar above the two smaller barrels which is either pneumatic / hydraulic lines for extending the barrels or gas lines, and there's a wire at the front of the 40mm which would probably be some kind of velocity sensor in fiction (as used on some AA guns) but IRL is probably an igniter. Also the front sights on the upper machine guns look like spark plugs. Evil Tim (talk) 02:25, 27 August 2015 (EDT)