10mm would make it an SMG

I just realize that if this weapon really was supposed to fire, in the story, 10mm rounds, then it isn't really a rifle as it is trying to be called some sort of future assault rifle. It's more like a submachine gun to me. Excalibur01 05:23, 16 January 2009 (UTC)

10mmx24mm is the official caliber, according to the technical manual. So, it'd be kinda similar to the VSS in caliber, right?-protoAuthor
It shoots 10mm caseless according to the books-S&Wshooter 00:40, 24 August 2009 (UTC)

it could be a 10mm rifle round?

- It's a short cartridge, but being without a case that isn't so surprising. IIRC, the whole cartridge in the HK G11 was pretty short, too. And of course the German 7.92 'Kurz' is damn short as well, even with a casing. It could still very well be a conical-shaped rifle projectile, but just in a short cartridge/propellant package (without a case, as the rounds are caseless). And a 'shorter' rifle bullet is one of the prominent parts of the definition of 'assault rifle', after all. Just a thought. StanTheMan 21:57, 20 March 2010 (UTC)

- But it's not the same round as a 10mm Auto pistol cartridge, it's something different - the rounds in the Pulse Rifle are described in the film as 10mm explosive-tipped caseless, standard light-armor piercing round. A caseless round, not brass-cased rounds (The prop's real guns fire real brass-cased bullets, but bear with me here). Anyway, not 10mm Auto. Again, I don't think the weapon (in it's own fictional context, that is) fires a pistol-type projectile like a SMG. It's more likely the rounds are simply 'short' rifle cartridges, hence, it is proper to call it a 'rifle' (Though 'assault rifle' would be more accurate). The fact the dimension is the same as a real 10mm Auto doesn't sound like anything more than coincidence. StanTheMan 23:16, 20 March 2010 (UTC)

-True. Despite the fact that modern propelants would have 10x24 as a pistol round(though a very powerful one), if space travel like in the movie is possible, i can assume that firearm propelants are more powerful and advanced. i still have 2 question:1. Armor-peircing ammo is gereraly small, fast rounds, to why are these rounds big and fat? I guess they are the AP variant of the regular 10x24mm round. Second, what is a "pulse rifle"? every other sci-fi weapon's name is self-explanatory. Blasters, laser guns, plasma rifles, but what's a pulse? A pulse of what? Any ideas? Mandolin 01:10, 21 March 2010 (UTC)

We don't know what the projectiles in the film look like, so again, they could still be conical rifle-shaped projectiles that are quite capable at defeating armor. The Russian VSS(VAL), mentioned by someone above, fires a fairly short 9x39mm cartridge (based on M43), yet it's still a conical-shaped round (With a hardened tungsten carbide core) that is armor-defeating. Though typically lighter and faster bullets are better for penetration, larger-diameter rounds can still do that job as well, depending on how they're designed. Plus larger projectiles give better hit power on-target than smaller ones. One of the well-noted problems with the 5.56mm NATO is that it really doesn't have a lot of force to it because it's light and small, which is probably one of the main reasons for development of the 6.8 round, and also why many armies still use 7.62mm caliber rounds (either M1943/AK or NATO cartridges). Plus the rounds are stated to also be 'explosive-tipped' so even if the rounds don't have very rifle-style projectiles, the explosive would probably be there to help defeat armor.

As for your second question, the 'Pulse' part of Pulse Rifle most likely comes from the concept that the weapon does not rely on mechanical parts to fire it's round (that is, a firing pin physically striking a percussion-type primer) but instead uses an electronic 'pulse' to fire the weapons ammunition (by charging/detonating an electronic primer). This of course, allows for a weapon with fewer moving parts, easing manufacture, service/maintenance, etc. If you've heard of 'Metal Storm' weapons, that's pretty much what it means. StanTheMan 22:54, 21 March 2010 (UTC)

This would also allow for variable fire rates.

Of course, James Cameron didn't consider ANY of this when he wrote the lines in his script. He just blurted out what sounded cool. MoviePropMaster2008 19:25, 22 March 2010 (UTC)

Actually, James Cameron is quite famous for designing the things in his movies in far more depth than what we end up seeing on the screen. And let's not forget the H&K G11 was under development when this film was being made, so the caseless ammunition technology did exist back then. While the G11 used a traditional firing pin, the concept of electronic firing of caseless rounds was known. If you just read the Aliens Colonial Marines Technical Manual, which was developed from Cameron's original concepts, you can see these weapons, particularly the M41A, were very comprehensively thought-out. They may not be 100% realistic, but they were developed using believable technology.--Leigh Burne (talk) 09:24, 31 October 2012 (EDT)

- I belive it is useing an Intermediate Round, its shorter then rifle caliber but longer then a pistol caliber. Check this out to learn more[1]

The "pulse" could also mean it's an electrothermal-chemical (ETC) gun, using electricity to turn the primer of a very inert charge to plasma. Though, again, the writer clearly just said pulse because it sounded cool. Probably was just a rifle to go with your flashy pulse wristwatch. Evil Tim 02:14, 21 April 2011 (CDT)

Was one of the gang types in the opening of Judge Dredd using a pulse rifle?

Both Aliens and Dredd were shot in the UK, where there is pretty much one supplier of firearms to the film and TV industry; they certainly had one live-firing pulse rifle at the time Dredd was produced.

-On second thoughts, no, it's a pump action shotgun. But it's what a shotgun would look like if tha manufacturers of the M-41 made one.

Oh, now I have to dig out my Aliens: Colonial Marines Technical Manual and find who the makers are in that universe... Armat. That's the company. God I love that book-protoAuthor

Hi, UK fan here. I have an Alien Trilogy special of a mag called "Science Fiction and Fantasy FX", where they did an interview with the armourers. You're right, the same company that made the M-41a also did the Dredd weapons (with some complaints about that movie).

Random note if anyone makes a page for it:

The videogames [and comic books] are called "Aliens versus Predator," not "Alien vs Predator;" only the first movie is called that, and the at least in the case of the second game "versus" is spelled out completely in the title. Vangelis 08:15, 22 July 2009 (UTC)

Despite it being called a 30mm grenade launcher, it takes shells that are far too small to be "30mm" Excalibur01

I think a resion they would use small grenade is A they developed more explosive compound. or they want small grenade encase there fighting in environment like space stations, and colony's. where a large charge might destroy live support.

a page that bringes up some intersting points about firearms in space, and spaceships

Who added this picture of an airsoft pulse rifle that appears on most of our pages where the gun is used:

Shouldn't we be using this picture instead: 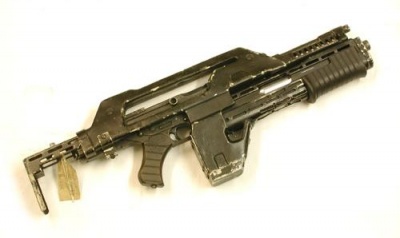 Unlike the previous pulse rifle pic (which, as I said, is an airsoft replica), this one is a picture of an actual screen-used M41A that was used on Aliens and Alien³; Dan Shea photographed it for the Long Mountain Outfitters site during his trip to Bapty & Co. in 2002. Shouldn't we be using a picture of a screen-used weapon instead of a fake one? -MT2008 16:08, 13 December 2010 (UTC)

Hell yes it would be awsome.Simmons 8492

I'm sorry, but I really don't think that this has been used in The Simpsons or South Park. That is the reason that they don't have pages, none of their weapons are based on specific ones.--Jackbel 20:41, 24 January 2011 (UTC)

Agreed; it was very clear in the Simpsons. -SasquatchJim.

Ok, well maybe the simpsons was a homage, but I still think that South Park and Ben 10 are out of the question

just saw a video of a working pulse rifle in 9mm and the shotgun is a single shell pump action 12 guage http://www.youtube.com/watch?v=am76xV8Aubk