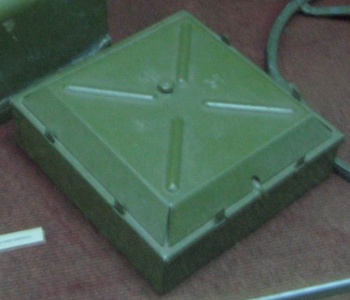 The TM-35 is a Soviet Union (Russian) World War II Anti-tank mine, there were basically 2 different versions, the TM-35 and the improved TM-35M which were very similar.

The TM-35 was the initial version which was introduced into service in 1935. It was a rectangular, metal cased anti tank mine which featured a carrying handle on one side. The detonation charge consisted of several 200g TNT blocks. In 1939 an improved version, the TM-35M was introduced which featured a larger detonation charge of 4kg. This increased the overall height of the mine to 115mm. When World War II started, production of the earlier TM-35 ended but available supplies were used up. Both versions served in Soviet service until the end of WWII.

The TM-35 and variants can be seen in the following films, television series, video games, and anime used by the following actors: