Switchback is a 1997 crime thriller written and directed by Jeb Stuart and stars Dennis Quaid as an FBI agent on the hunt for a serial killer and who teams up with a small-town sheriff (R. Lee Ermey) to continue his investigation. The film also stars Danny Glover and Jared Leto.

The following weapons were used in the film Switchback:

Frank LaCrosse chambers his SIG-Sauer P226 during a police operation.

Frank aims his P226 at a train conductor.

Frank holds his P226 during the climax.

Frank looks for a suspect during the climax. Note smaller, filled-in barrel, and seams running under the duscover. This particular weapon is a resign or a rubber replica, also noted by the fact that the P226 is thrown off the train in a moment.

A bar patron pulls a Single Action Army revolver after a scuffle with Lane Dixon (Jared Leto) and Bob Goodall (Danny Glover). Dixon takes the revolver after Goodall manages to get the patron to lower his gun, and uses it for the remainder of the film.

The patron holds his Single Action Army on Lane Dixon.

Dixon pulls the Single Action Army on another patron.

A bar patron tries to shoot Bob Goodall in the back with a Winchester Model 1873 during the scuffle, but Dixon is able to convince him otherwise.

A couple of Amarillo Police SWAT officers use Heckler & Koch MP5A3 submachine guns when confronting a barricaded suspect with hostages.

two SWAT officers hold their MP5A3 submachine guns during a standoff with a barricaded suspect.

A couple of Amarillo Police SWAT officers use Mossberg 590 shotguns during a police operation.

A SWAT officer holds his Mossberg 590.

Another SWAT officer holds his Mossberg (circled in red).

The Mossberg is visible through the windshield.

Shorty (Leo Burmester) shows Bob Goodall (Danny Glover) a Taurus Model 80 revolver after Bob asks him if he is afraid of the serial killer in the news. 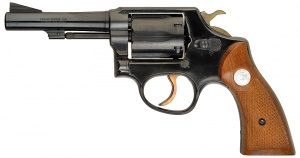