Subway is a 1985 French crime comedy drama about a man who is hiding in the fascinating world of the Parisian subway before the mafia and police. Written and directed by Luc Besson. Starring Christopher Lambert and Isabelle Adjani.

The following weapons were used in the film Subway:

The mafia boss henchman holds a Beretta 92SB pistol in his hand.

Helena (Isabelle Adjani) carries a Spanish Astra 357 revolver with a four inch barrel in her purse. This firearm is certainly an Astra (and not a similar Smith & Wesson) because it has a much thicker hammer that has no bluing or firing pin, a different cylinder release and a differently shaped trigger guard. Astras have thick wood grips that have medallions (like Smiths) and they also have an overall similar profile, so it is easy to confuse the two. 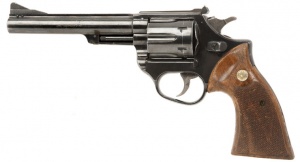 Helena pulls her Astra on Fred and calls for him to return her husband's documents. Note the lack of a firing pin on the hammer, which means this cannot be a Smith & Wesson Model 19.

Helena with her revolver held on the seller of musical instruments. Note the thick, straw-colored hammer and cylinder latch, which also shows this cannot be a similar Smith & Wesson.

After an encounter with the florist, Helena hides the Astra back in her purse.

Fred charges the revolver, but leaves only one chamber empty...

then plays Russian roulette with the rollerskater´s head!

The florist (Richard Bohringer) and some policemen are equipped with a Colt M1911A1 pistol.

The florist on the platform hid his 1911 in a basket with flowers. Keep in mind that this was several years before Terminator 2, people!

Two police officers are shown armed with 1911s as they cover the back of inspector Batman (Jean-Pierre Bacri) while he walks into the elevator. Note that the pistol held by the officer on the right has a longer trigger. This could mean that this particular pistol is a Star Model B.

Fred pulls a gun on the festival organizer. 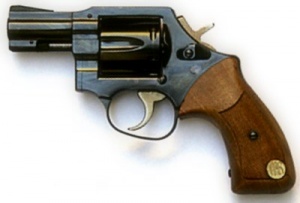 Inspector Batman clears the elevator with an MR-73 in his hand.

The policemen with the MR-73s lurk before the elevator, waiting for Fred.

Inspector Batman is second from left.

Jean charges his gun in the subway station toilets.

His sight is accurate, he never misses.

Members of CRS unit are equipped with MAT-49 submachine guns.

Attempting to capture Fred, the commissioner sends cops armed with with submachine guns into the subway.

Some CRS men are seen with a MAS-36 rifles on his back.

Jean (Pierre-Ange Le Pogan) is waiting for an important call from the florist. Around him runs a CRS ​​unit.
Retrieved from "https://www.imfdb.org/index.php?title=Subway&oldid=1289389"
Categories: