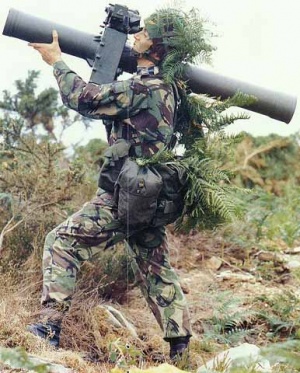 The Starstreak HVM (High Velocity Missile) is a British short range surface to air missile. It is a three stage missile that features a somewhat unique and distinctive warhead consisting of three separate guided kinetic/explosive submunitions known as "hittiles" because they are designed to strike their target directly rather than use a proximity fuze (the term has been applied to other similar British systems in the past such as Rapier). When the weapon is launched the first stage blasts the missile out of the tube and is then immediately jettisoned. The second stage then kicks in at a safe distance from the operator, accelerating the missile to Mach 3.5 within 400m. After the second stage burns out the three individual hittiles separate from the missile, and continue on to the target in a formation approximately 1.5m wide. Guidance is SACLOS (Semi-Automatic Command to Line Of Sight) use laser beam-riding, meaning that the operator must keep the target under his crosshairs from when the missile is fired until the point of impact, which guides the missile (and subsequently the hittiles) onto the target via a pair of lasers projected from the aiming unit. The fragmentation warheads of the hittiles themselves are delayed impact fused, meaning that they penetrate into the target slightly before detonating. Starstreak also has an unintended anti-armour capability: since the projectiles travel at 4,100 feet per second, they have comparable kinetic energy to a 40x311mmR shell fired from a Bofors 40mm cannon, and the armour-piercing tungsten body means they would potentially even be effective against IFV-grade armour.

The missile is currently used by the British Army in three different configurations: shoulder launched, in a triple tripod mounting known as the "Lightweight Multiple Launcher" (LML), and mounted on the roof of an Alvis Stormer in an eight round launcher known as "Self Propelled High Velocity Missile" (SP HVM). In addition to these it has also been developed into many other configurations including "Hellstreak" or "Air to Air Starstreak" (ATASK) for use on Apaches, the navalised "Seastreak" launched from either a six round version of the LML or from a 24 round CIWS, and a series of four round launchers with integrated tracking and guidance which can be mounted to light vehicles (previosuly "Thor", currently "Rapid Ranger").

The Starstreak HVM and variants can be seen in the following films, television series, video games, and anime used by the following actors: