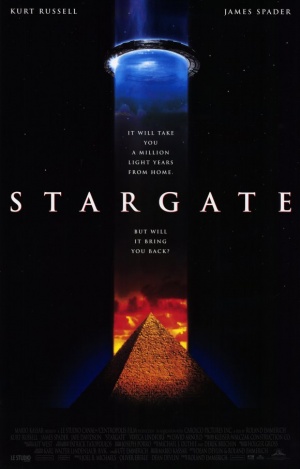 Stargate is the 1994 science fiction film starring Kurt Russell as USAF Col. Jack O'Neil and James Spader as Dr. Daniel Jackson, who travel with a special ops team from Earth to a far flung planet on the other side of the universe via a recently activated portal known as a "stargate". The film marked the first collaboration between director Roland Emmerich and producer Dean Devlin (who co-wrote the screenplay and later would collaborate on Independence Day and the 1998 US adaptation of Godzilla) . The film's premise was later adapted (by a new team) into a very successful television franchise, which included several television films, an animated series as well as three television series: Stargate SG-1, Stargate Atlantis and Stargate Universe.

The following weapons were used in the film Stargate (1994):

The Beretta 92FS is utilized to represent the USGI (and USAF) standardized M9 sidearm when in the hands of the USAF exploration team. Colonel Jonathan "Jack" O'Neil (Kurt Russell) is seen at his house, where his son died, with a 92FS early in the film; this particular gun is a "private purchase" commercial Beretta 92FS, due to the Colonel being "inactive reserve" at the time.

Later in the film both Colonel O'Neil and Senior Airman Brown (Derek Webster) are seen armed with Beretta 92FS pistols as part of the USAF team. Berettas are also utilized by Technical Sergeant Louis Feretti (French Stewart) and Dr. Daniel Jackson (James Spader) at various points in the film. After the entire team has been captured the teenage Abydonian rebels liberate the team's base camp and apparently recover several Beretta 92FS pistols that are used by them, and the remaining members of the team, during the final battle with Ra's forces.

Technical Sergeant Feretti (French Stewart, right) with a Beretta 92FS as Ra's ship lands on Abydos. Staff Sergeant Freeman (Christopher John Fields, left) is armed with a Heckler & Koch HK94 "dressed" to look like a H&K MP5A3 submachine gun. Note that despite their obvious insignias both Feretti and Freeman are officially - though inaccurately - credited as 'Lieutenants' as are the rest of Colonel O'Neil's team.

Dr. Daniel Jackson (James Spader) is seen aiming Senior Airman Brown's (Derek Webster) Beretta at Anubis and the Horus guards as they beam down from Ra's ship. See entry in Glock 17 section (below) for explanation on how Jackson ended up with the Beretta.

Dr. Jackson shoots a Horus guard. Sha'uri (Mili Avital) is also seen with a 92FS pistol in this scene

Dr. Jackson with a Beretta 92FS.

All team members, with the exception of Colonel O'Neil (Kurt Russell) and Senior Airman Brown (Derek Webster), carry Glock 17 pistols. All remain holstered throughout the film with the exception of Lieutenant Colonel Kawalsky (John Diehl) who, in the Special Edition of Stargate, is seen pulling it on the people of Nagada when they are closing the city doors before the sandstorm hits.

Daniel Jackson (James Spader, left) briefs Colonel O'Neil (Kurt Russell) and Kawalsky. Jackson is carrying a Glock in a holster on his right side.

Daniel Jackson going through the contents of his vest. In the foreground is his belt with holstered Glock. Shortly after this scene Jackson finds the beast of burden and is drug across the desert by it. Not so obvious is the fact he leaves his weapon behind. Later in the film Senior Airman Brown (Derek Webster) gives Jackson his Beretta 92FS before the team re-enters the temple after Ra's spacecraft has landed.

Technical Sergeant Feretti, seen on the left with a holstered Glock.

Colonel O'Neil (Kurt Russell) and Airman First Class Reilly (Jack Moore) are armed with fixed-stock Heckler & Koch HK94A2s chopped and converted to resemble the Heckler & Koch MP5A2 submachine gun. Both are fitted with Surefire flashlight forearms and telescopic sights on STANAG mounts. The same faux MP5A2 submachine guns are used by the rebelling people of Abydos (namely Skaara (Alexis Cruz) and a band of teenage rebels) later in the movie when they fight Ra's forces (the rebels had found the weapons in the team's equipment cases at their base camp).

Colonel O'Neil (Kurt Russell) prepares to enter the Stargate with his HK94A2 conversion at the ready.

O'Neil with his HK94A2 at the ready. This a good shot showing the Surefire forearm and sight, as well as the metal lower receiver, lack of paddle magazine release and lack of barrel lugs - All clearly indicating an HK94A2 mocked up to pass for an MP5A2.

Airman First Class Reilly (Jack Moore, right) is seen cleaning sand out of the breach of his HK94A2.

Skaara (Alexis Cruz) shoots into the air with a HK94A2.

Ferretti (French Stewart), Skaara (Alexis Cruz), and a number of the young rebels are armed with Surefire-equipped Heckler & Koch HK94s (sans telescopic sights) during their battle with Ra's forces.

Feretti (French Stewart) gets knocked down while holding his HK94A3.

Lieutenant Colonel Kawalsky (John Diehl) can be seen carrying the Heckler & Koch SR9TC, outfitted with the HK91 "tropical" or "wide" forearm. It should be noted that like the rest of O'Neil's team Kawalsky is officially credited as a 'Lieutenant' (that is, "Lieutenant Kawalsky"), despite the fact that he - nor any other member of O'Neil's team - has a Lieutenant's insignia (in Kawalsky's case, he wears a Lieutenant Colonel's insignia throughout the film).

H&K SR9(TC) rifle with tropical forearm and bipod - 7.62x51mm. The TC version has the PSG buttstock as well as the trigger pack.

Kawalsky with his H&K SR9TC.

Good shot of the SR9TC wielded by Kawalsky.

O'Neil and Kawalsky stay low on a sand dune when they see Ra's ship in the distance.

The locals recover at least two SR9s from the team's base camp and use them against Ra's forces. Note that neither is fitted with a scope here.

M16A1 rifles are carried by the USAF guards in the Stargate Command Center. Some are standard variants, while others have A2-style handguards installed to pass for M16A2s.

USAF guards wield their M16A1s. One M16A1 with A2 handguards is seen in the foreground.

The young rebel on the far right fires a Mossberg 500 Bullpup.
Retrieved from "https://www.imfdb.org/index.php?title=Stargate_(1994)&oldid=1361780"
Categories: