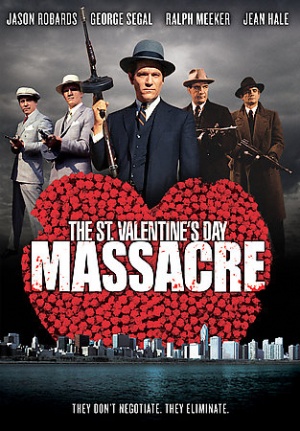 The St. Valentine's Day Massacre is the 1967 gangster film directed by Roger Corman and is based on the infamous 1929 Chicago mob killings.

The following weapons were used in the film The St. Valentine's Day Massacre:

The Thompson M1928A1 is used throughout the film by mobsters in both Capone's and Moran's gang. The use of the M1928A1 is anachronistic as most of the film is set in 1929 (with some scenes from earlier), before the development of the M1928A1. Frank Gusenberg (David Canary) uses a M1928A1 in an early scene when he wounds Jack McGurn in a phone booth. Two of Capone's men use M1928A1s during the actual massacre, including John Scalise (Richard Bakalyan) and Albert Anselmi (Rico Cattani). John Scalise anarchonsticaly uses a M1928A1 with a strange MP40 style sights during the 1926 hit on Hymie Weiss(Reed Hadley).The gangsters at this time used M1921s and M1928s (as the M1928A1 was not yet developed). During the actual massacre in 1929, one of the Thompsons used a 50-round drum magazine while the other used a 20-round stick magazine, unlike the film in which both Thompsons are equipped with 50-round drums.

One of Moran (Ralph Meeker)'s men fires at Capone in the Hawthorne Hotel during a 1925 flashback.

Scalise (Richard Bakalyan)rubs garlic on the .45 ACP rounds he loads into his Thompson's drum magazine, to infect the victims if they are not killed instantly.

Capone's killers line the seven massacre victims up against the wall.

The muzzles of the two Thompsons as the seven men are mowed down.

Scalise and Anselmi fire at Weiss. 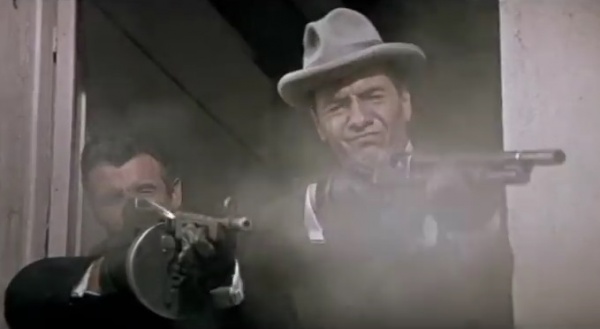 In the next scene of the same hit,the M1928A1 appears with rounded sights.

Several 12 Gauge Double Barreled Shotguns are used throughout the film. During the early attempted hit on McGurn, Pete Gusenberg (George Segal) aims a shotgun out his car window. Frank later holds one when Nick and Pete are whiskey-dealing. Gino (Jack Nicholson in an early uncredited role) helps load the shotguns later used in the massacre. Two of Capone's men (dressed as policemen) use double-barreled shotguns during the massacre, firing both barrels at the end to finish off the victims. This is historically correct as four shotgun shells were found at the scene.

Pete (George Segal) waits for Frank to finish the hit with his shotgun ready.

Frank holds a shotgun on Nick.

Capone's killers line the seven massacre victims up against the wall.

The "police officers" fire their shotguns into the bodies of the massacre victims.

Almost every gangster in the film uses a Colt Detective Special. Jack McGurn (Clint Ritchie) and his bodyguard are both armed with Detective Specials. Al Capone (Jason Robards) disarms Charlie Fischetti (Paul Richards) of one, swearing death for Lolordo's death.Joe Aiello (Alexander D'Arcy), packs himself a Colt DS while trying to escape,but Al Capone disarms him and kicks him with tthe butt of revolver so he can cut his throat .Scalise and Anselmi use them in the killing of Dion O'Banion (John Agar) and are both disarmed of their Detective Specials by Capone's mobsters in the end. McGurn gives Nick Sorello (Frank Silvera) an unloaded Detective Special from his armory, which Pete Gusenberg later takes from him and tosses aside. Moran's right hand man James Clark (Kurt Kreuger) uses a Detective Special during the killing of Patsy Lolordo (Michele Guarini).

McGurn (Clint Ritchie)'s bodyguard stands at his side with a Colt DS drawn.

Capone's bodyguard lays next to him with a Detective Special drawn during the Hawthorne Hotel ambush flashback.

Capone stares at Fischetti's Detective Special when he swears vengeance for Lolordo's death.

Capone's men, armed with their own Detective Specials and the ones they disarmed, intimidate Scalise and Anselmi as Capone approaches them with a baseball bat.

More historically accurate than the M1928A1s more commonly seen in the film, a Thompson M1921 is wielded by Pete Gusenberg (George Segal) during the Hawthorne Hotel ambush in 1925.

Pete fires an M1921 at the Hawthorne Hotel.

Pete moves closer to the hotel to get a better shot.

During the 1926 hit on Hymie Weiss (Reed Hadley), Albert Anselmi(Rico Cattani)slamfires a Winchester Model 1897. Another Model 1897 is seen during the final montage held by a prison guard at Moran's funeral in 1957. 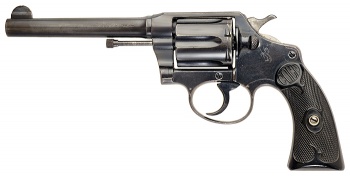 The "police officers" order Moran's men to line up against the wall.

McGurn keeps his own personal armory behind a wall in his brothel/nightclub, which contains: