The following weapons were used in the film Spring Breakers:

Alien (James Franco), Candy (Vanessa Hudgens) and Brit (Ashley Benson) use Zoraki 925 pistols in the film. Not only are they shown to be real guns, they are also shown firing in full auto. 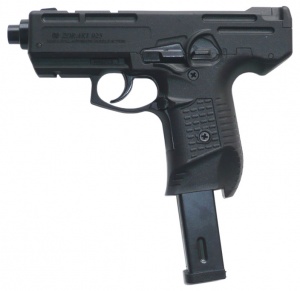 Alien opens a case with a pair of Zoraki 925s.

Brit (Ashley Benson) attaches a suppressor to her Zoraki 925.

Alien (James Franco) loads a magazine in his Zoraki 925.

It gets a little weird here.

Alien with a pair of suppressed Zoraki 925s.

Alien has a nickel-plated Beretta 92FS. This may be a blank-firing replica. 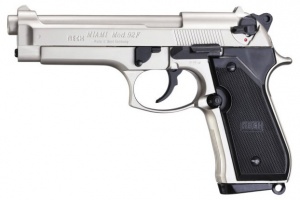 The Beretta in Alien's right hand.

The Beretta in Alien's left hand.

Alien fellates Brit's Beretta. (Apparently, this was improvised by Franco.)

One of Big Arch's henchmen chambers a round into his Beretta.

Alien also has a nickel-plated Taurus PT92AF. This may also be a blank-firing replica. 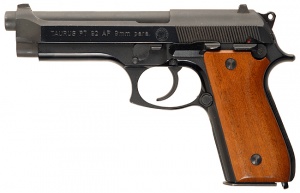 The Taurus in Alien's left hand.

The Taurus in Alien's right hand.

Alien (James Franco) appears to carry a pair of Beretta 92FS Inox for part of the film.

Alien threatens a spring breaker with his Inox.

Alien's pair of Delta Elites number 4 on the table.

The stainless 1911 sits near the bottom right of the screen.

Cotty threatens a spring breaker with her Delta Elite. Although the girls all wore identical outfits and ski masks, Cotty was the only one with pink highlights in her hair.

Cotty celebrates off screen with while holding her 1911. 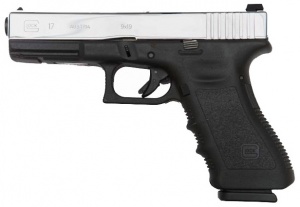 The girls have water guns shaped like Smith & Wesson 4505s. They later use one to rob a diner. 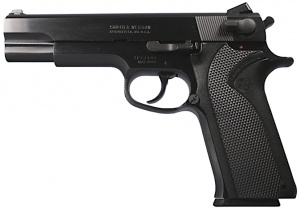 Brit drinks from her water gun. (That's not water in there.)

Candy with the water gun during the diner robbery. The only way to tell it's her because she reenacts it later in the film.

Alien has a Scarface diorama with a Tokyo Marui Glock 26 Advance in it. (Some people will buy anything.) 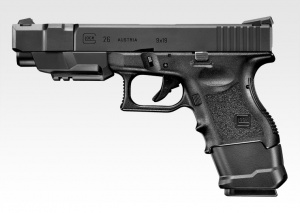 The Tokyo Marui Glock 26 Advance in the diorama. It should also be noted that the one hundred dollar bill displayed was a redesign that came well after Scarface came out.

A Glock 20SF with a Lone Wolf barrel is seen in Alien's arsenal. This has been positively identified by the film's firearm consultant. 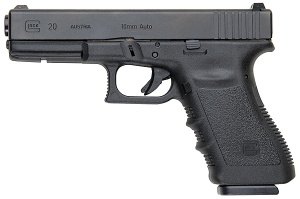 A Heckler & Koch USP is seen in Alien's arsenal.

A pair of Springfield Armory V16 chambered in .45 Super are seen in Alien's arsenal. This has been positively identified by the film's firearm consultant.

A Glock 35 is seen in Alien's arsenal. This has been positively identified by the film's firearm consultant. 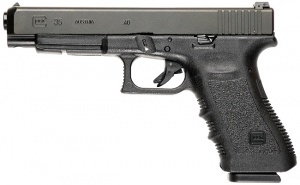 One of Big Arch's henchmen is armed with a Cobray M11/9. 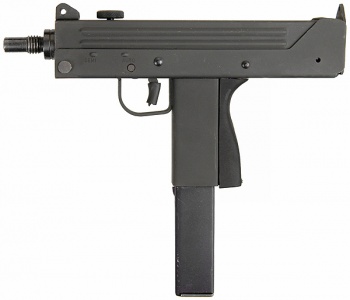 Big Arch's henchman, apparently a henchwoman, with his M11/9.

Candy (Vanessa Hudgens) carries a nickel/stainless Coach Gun for one of the robberies.

Candy with the coach gun.

Candy with the coach gun.

A now unmasked Candy with her coach gun.

Cotty (Rachel Korine) carries a Mossberg 500 Cruiser with an extended magazine tube for one of the robberies.

Cotty with the Mossberg 500 Cruiser.

Brit fires the Mossberg in celebration.

The Saiga-12 leaning on the window next to a pair of nunchuku.

Alien has an Colt LE6920 mounted on his wall.

Leaning in the corner of Alien's room we can see what appears to be a Colt AR-15A3 Tactical Carbine with the 9" version of the Spike's Tactical Havoc Launcher under the barrel.

Brit carries an AMD-65 during one of the robberies. Her particular model may be a Century Arms built rifle which came with wooden grips and a longer 16" barrel. The barrel length is apparent because the gas block does not sit directly next to the front sight base.

Brit with the AMD-65, although it's only possible to tell via the process of elimination. (Candy is later seen with the coach gun, and Cotty has the Mossberg (see above), leaving only Brit.)

One of the girls celebrates while holding her AMD-65.

Brit with her AMD.

We see a pair of Spike’s Concussion AR pistols built upon what may be Spikes Tactical receivers. It was confirmed by the film's firearm consultant that four of them were used throughout the film.

One of the AR pistols on Alien's wall.

Alien with a pair of AR pistols.

Alien's arsenal with the AR pistols front and center.

Alien has a custom ArmaLite M15 rifle in his arsenal. This one features a full-length barrel, a target stock, flat-top receiver, brass deflector, railed handguard, bipod, scope, muzzle brake and a Beta-C mag.

Leaning in the corner of Alien's room we can see what appears to be a Colt AR-15A3 Tactical Carbine with the 9" version of the Spike's Tactical Havoc Launcher under the barrel.