The following weapons were used in the film Spider-Man 3: 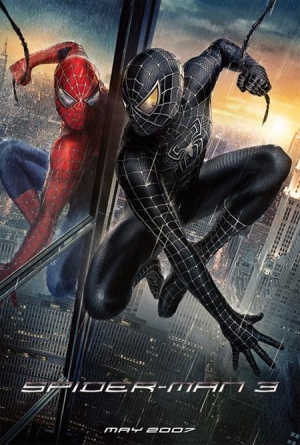 Several NYPD officers are seen with Beretta 92FSs throughout the movie, mainly holstered and are mostly seen during the Sandman rampage from the truck, which is incorrect. The real NYPD use SIG-Sauers and Glocks rather than Berettas.

A police officer inspects a truck with his Beretta 92FS.

The same cop with his Beretta 92FS.

A close-up of two Berettas aimed at Sandman.

Ben Parker's killer (later revealed to be Flint Marko who killed Ben Parker), Dennis holds his Beretta 92FS Inox while trying to order Marko to get into the car.

"Get in! What are you doing?!" Dennis' Beretta 92FS Inox is visible on the bottom left.

An officer with a holstered Glock 17 on his hip as he puts a "No Crossing" sign.

Flint Marko (Thomas Haden Church) is seen with a Colt Python during the flashback of Ben Parker's death.

Flint Marco taps his Colt Python on the window of Ben Parker's car.

The guard in the van full of money is seen with a Remington 870 before Sandman storms in.

The guard with his Remington 870 before pushed by Sandman.

A news report shows a ESU officer with an M4A1 carbine when the trucks flip over. A pair of M4A1-toting ESU officers can also be seen running past a female reporter covering the hostage crisis, their M4A1's sporting M68 Aimpoint red dot scopes and Surefire M500AB forend weaponlights.

A ESU officer with his M4A1 Carbine before being squashed by an armoured truck.

The ESU officer on the far left has an M4A1.

A news report shows an ESU officer firing his M4A1 at Venom on the top left, but misses.

An N.Y.P.D. ESU officer to the left carrying an M4A1 carbine.