Soldier of Fortune is a 1955 adventure movie directed by Edward Dmytryk and starring Clark Gable and Susan Hayward. American photojournalist Louis Hoyt covertly enters Communist China from Hong Kong but is imprisoned as a suspected spy. His wife Jane (Hayward) arrives in Hong Kong and decides to arrange his escape. Local shady shipping magnate Hank Lee (Gable) tries to dissuade her from such plans. But after he falls in love with Jane and realises that she will not give up, Hank decides to rescue Louis himself.

The following weapons were used in the film Soldier of Fortune:

Hank holds the pistol. The shape of the grip matches the A1 version.

Hank tucks the pistol into his belt.

The grip of Merryweather's holstered revolver is seen.

Hank Lee loads the revolver that he confiscated from Merryweather.

Hank returns the revolver to Merryweather after Inspector agrees to help.

The skipper of Hank's junk Ying Fai (Frank Tang) holds an unidentified pistol during the prison break for Louis Hoyt.

Ying Fai cocks the slide of his pistol. The gun is seen very unclear due to the darkness and the dirty windshield.

Ying Fai, disguised as a soldier, breaks in the room where Hoyt is held. The pistol seems to have a massive tubular barrel shroud, and the barrel protrudes slightly from it.

Another view of the pistol. The hammer spur can be seen.

Some Chinese soldiers, guarding the prison, and sailors, boarding the ferry from Hong Kong to Macau, are armed with Sten Mk II submachine guns.

A soldier with a Sten guards arrested Louis Hoyt.

A sailor with a Sten.

The Canadian stock is seen.

Several other Chinese sailors are armed with Thompson M1928A1s. One of the Thompsons has an uncommon hooded front sight.

The hooded front sight of a Thompson is seen.

A Beretta Model 38A submachine gun without the magazine is seen in Hank Lee's cabin on his junk.

The Winchester Model 70 and the Beretta Model 38A (the bottom one) hang on the wall in the captain's cabin.

A Winchester Model 70 with a sniper scope is seen in Hank Lee's cabin on his junk.

The Winchester Model 70 (on top) and the Beretta Model 38A hang on the wall in the captain's cabin.

Several Chinese soldiers are armed with Mauser Gewehr 1898 rifles. The rifles are seen only in the night scenes.

A sentry with Gewehr 98 rifle. The sword bayonet is seen.

Another sentry holds a Gewehr 98 without a bayonet. The straight bolt handle is seen.

Hank Lee armes his junk Chicago with an Oerlikon 20 mm Cannon, hidden under the deck. In the final scene he uses the gun against the pursuing patrol boat.

During the inspection of the junk Inspector Merryweather is very surprised by the find.

A dozen 20-round magazines for the Oerlikon.

A good view of the barrel.

Hank aims the Oerlikon at the patrol boat.

A close-up of the muzzle. 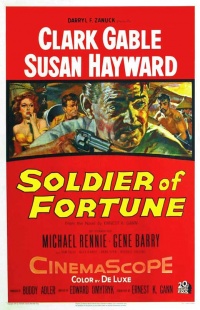 A Chinese patrol boat is armed with a Hotchkiss 6-pounder (57 mm) gun, a common gun on various navies in late 19th - early 20th century. During the WWII such guns were still in use on small crafts. Two machine guns that are also mounted on the boat are mockups, approximately representing the flexible mount variant of Browning AN/M2 as they are fitted with spade grips.

The patrol boat boards the ferry from Hong Kong to Macau. The Hotchkiss gun and the mockups of the machine guns are seen.

The Hotchkiss gun is seen.

On the close-ups of the deck of the patrol boat during the chase after Hank's junk, the Hotchkiss gun is replaced with a US Navy 3-inch/L23 Mk 9, Mk 13 or Mk 14 "boat gun", a light naval cannon designed for the use on boats and submarines. Most likely, these scenes were filmed not on a real boat, but on a mockup of the deck in the pavilion.

The 3-inch gun and mockup machine guns are seen.