Solaris (Solyaris) is a cult Soviet science fiction movie, based on the novel by Polish sci-fi writer Stanisław Lem, who was disappointed with it, because director Andrei Tarkovsky completely changed the meaning of the plot. Nevertheless, film was well-received both in the Soviet Union and abroad and remains one of the staples of cosmic science-fiction, directly inspiring such films as Event Horizon. The film was remade by Steven Soderbergh in 2002.

In a rare case for a Soviet cinema, the film was partially filmed in Tokyo, Japan (mostly the futuristic city landscapes).

The following weapons were used in the film Solaris: 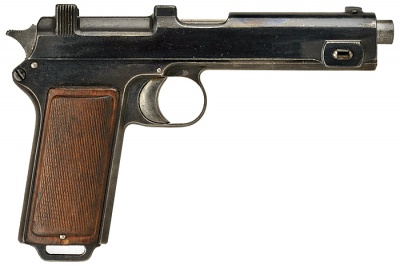 The Pistol on a shelf or desktop in Dr Gibarian's quarters.

The same pistol at Hari's (Natalya Bondarchuk) feet when Dr. Kelvin's awakes to find her in his bed.
Retrieved from "https://www.imfdb.org/index.php?title=Solaris&oldid=1387043"
Categories: