The Sixth (Shestoy) is a 1981 Russian "eastern" action movie directed by Samvel Gasparov. The story takes place in 1920s, in a small town that is terrorised by a gang of outlaws. Roman Glodov (Sergey Nikonenko) is the sixth chief of militia (the same as sheriff in Wild West town) - five his predecessors were killed by the gang. Now Glodov and his team are ready to fight.

The movie plot has some similarities with Seven Samurai and The Magnificent Seven.

The following weapons were used in the film The Sixth (Shestoy):

Nagant M1895 revolvers are main weapons of Roman Glodov (Sergey Nikonenko) and several men of his team - Aleksandr (Timofei Spivak), Nikita (Sergei Ulyanov) and Pavlik (Vladimir Grammatikov). In the final scene of the movie Danilevsky (Mikhail Kozakov) also carries Nagant revolver. His Nagant is then hold by Olga (Larisa Belogurova). Most revolver are of post-1930 version but some pre-1930 Nagants are also seen.

Glodov holds his Nagant during the encounter with a pair of brigands in the opening scene.

Glodov fires his Nagant during the shootout in the train.

Glodov with Nagant on the train roof.

Close view on Glodov's Nagant. This is a pre-1930 version with rounded front sight.

Danilevsky's revolver is seen in the final scene.

A Mauser C96 "Bolo" is used by Korytin (Igor Klass) during the shootout with bandits in the old building. 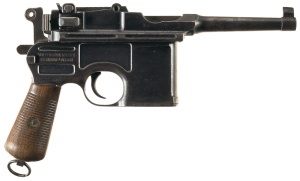 Short barrel of "Bolo" can be seen. The holster is also for short barreled version.

Another view of Korytin's pistol (at the left).

When Korytin (Igor Klass) descend the stairs, his "Bolo" switches to a classic Mauser C96.

A good view of the barrel of Arystarch's carbine.

One of Mironych's "lads" with M07 carbine.

A short barrel of M1907 carbine is seen behind Arystarch.

A militsioneer with Mosin Nagant M1938 Carbine during the shootout in the old building.

Weapons, hidden in the cellar. Here can be seen three full-length Mosin Nagant rifles, three "obrez", one of which has a very unusual pistol grip, and one Nagant revolver.

"Obrez" with a very unusual pistol grip is seen among the weapon hidden in the cellar.

Okhrim in close-in fighting with a bandit.

Lewis light machine gun is hold by militsioneer Arystarch Lushkov (Yevgeni Bakalov). In firing scenes it is replaced by DP-27 (see below).

Arystarch with his Lewis in the final scene of the movie. Close view to the muzzle.

Arystarch with his Lewis in the final scene of the movie.

Arystarch (Yevgeni Bakalov) uses Degtyaryov DT mocked up as Lewis during the shootout in the train. It was common in Russian movies filmed in 1970s-80s to substitute Lewis with visually modified DP-27 or DT when the machine gun must fire. 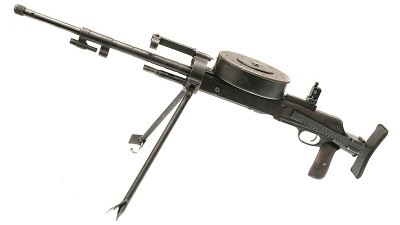 DT machine gun - 7.62x54mm R. DT could be dismounted from the tank or armored car and used with a bipod as a light machine gun

The brigands under the fire of Maxim M1910. 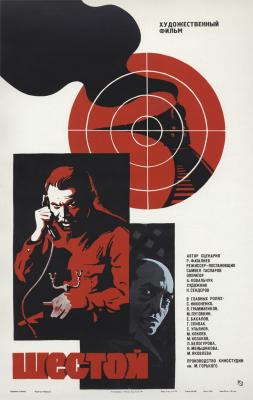