At the beginning of the game, protagonist Harry Mason receives a Smith & Wesson Sigma semi-automatic pistol from police officer Cybil Bennett in the Café 5 to 2. The handgun is a middle of the road weapon, with magazine capacity of fifteen rounds balanced out by mediocre accuracy and moderate stopping power. The handgun ammunition is not hard to come by, but becomes scarcer on higher difficulties.

Promotional material for Silent Hill: Homecoming would later establish that Silent Hill is set in 1983, a retcon that creates several anachronisms within the original game, including the Sigma's appearance over ten years before its production began. One must also wonder why a small town cop is carrying two full sized pistols. 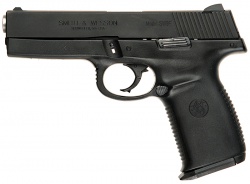 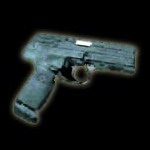 "Handgun received from Cybil. Holds up to 15 rounds."

Asawed-off double barreled shotgun can be found in the Otherworld Midwich Elementary School, the second major location of the game. The double-barrel shotgun somehow holds 6 rounds before reloading, has a wide blast radius and is extremely powerful when fired point-blank. The shotgun ammunition is much less abundant than the handgun's but becomes less of an issue towards the latter part of the game.

Sawn-off Baikal shotgun, similar to the one in-game. 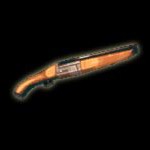 "Fires in a wide radius. Holds up to 6 rounds."

А Winchester Model 70 bolt-action rifle can be found leaning against the wall of a dirt pit near the Silent Hill Town Center. The gun is called "Hunting Rifle" in the game and it has a magazine capacity of six rounds. The gun is equally devastating at any range but the rifle ammunition is the scarcest of all and should be used only for bosses, tougher enemies, or if absolutely necessary.

Despite being a bolt-action rifle, it fires at semi-automatic rate of fire. The protagoninst also never works the bolt, probably due to the game's engine limitations. 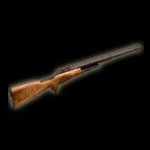 One of the other main characters, Dr. Michael Kaufmann, appears to carry a Ruger Blackhawk as his self-defense weapon. He can be seen firing it in various cutscenes. The gun is not available to the player. 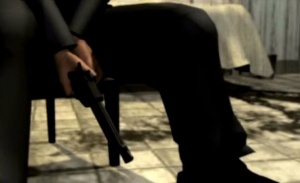 A startled Dr. Michael Kaufmann fires his revolver at Harry Mason. Either he is a very bad shot, or his revolver is partially loaded with blanks since Harry only backpedals completely unharmed.

A bonus weapon unlocked after getting the UFO ending. The gun's power depends on the player's previous game score. Has a laser aiming unit and unlimited ammunition. 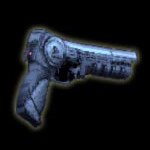